Says the girl who, up until about a year ago, didn’t eat beef.  Occasionally I’d eat pork, rarely chicken, always bacon (does that count?).  Then something clicked.  Perhaps it was having a very persuasive man sitting across from me at a restaurant table holding up a fork with a hopeful glimmer in his eye.  “Don’t you want to try some?  It’s DELICIOUS!”

The rest is history, I suppose.  She who would gladly forgo meat of any kind because it was too expensive on a budget and she could cook just about anything imaginable would never be bored, so why bother with it?  No loss, really.  And although my progeny turns his cute little nose up at grilled chicken, one of his favorite meals is still pasta stars cooked in homemade chicken broth.  He’ll come around… perhaps he needs to be persuaded.

In matters of meat, my father is king.  I grew up watching him eat venison steak or filet tips and eggs for breakfast regularly.  I can still smell the rich buttery and salty meat frying in the cast iron skillet, and my mother’s pot roast?  Well, that was just heaven to come home to – the aroma of meat and broth and onions filled the house, practically smacking you in the face as you opened the front door.  Those were the nights I took my  nose out of a book long enough to eat a hearty plateful (or two).

Dad will be thrilled to hear that I’m once again eating meat.  Whenever I catch a cold (rare), have a scratch, cut or ache (often, this is a farm after all), my father will endlessly promote red meat as the cure-all healer of the food world.  He has done this for at least 30 years that I know of, and the last 6 weeks were no different.  I did something stupid and, without going into detail, I sustained an injury that would not heal.  Five weeks and 3 doctors later, I finally saw a specialist and although things are still not 100%, at least I can wear a closed shoe on my right foot again.  The doctor prescribed some medications and told me how to care for my wound, and I’m doing so diligently.

According to my father, my body needed more red meat.  I made this stew and miraculously, I’m feeling much better.  Don’t you want to try some? It’s delicious!

Cut beef into 1 1/2″ cubes and season all over with salt, pepper and garlic powder.  Heat a heavy 6-quart soup pot over medium heat.  Add a teaspoon each butter and oil.  Add 1/3 of the beef cubes and brown on all sides.  Remove from pot, set aside, and repeat two more times with remaining butter, oil and beef .

Once all beef is browned and removed from pot, add onions and 1/2 t salt plus pepper to taste.  Cook over medium heat until softened and they have picked up much of the brown bits from the pot.  Deglaze the pan by pouring the wine over the onions and raise the heat to medium-high.  Cook and stir, scraping up the fond as you go.

When most of the liquid has evaporated, about 5-7 minutes, return the meat and accumulated juices to the pot.  Add water/broth and bay leaves.  Cover and reduce heat to a bare simmer; let cook about 30 minutes then add carrots.  Simmer another 30 minutes and add potatoes.  Simmer 30 minutes more.  Raise heat to bring mixture to a boil.  In a small bowl, stir together water and cornstarch.  Stir mixture into the stew.  This will thicken it just enough.  Taste for seasoning and adjust if necessary.

This recipe makes about enough for 6 servings, either right from the pot or portioned into containers for the freezer.  It is indeed a lucky man who finds himself with a bit of this kitchen lovin’ when his girl is far away.

Salting the onions immediately will help draw out the water in the vegetable.  That will assist in picking up the brown bits and also in softening them.

Yes, it does seem to be a long process, but most of it is unattended cooking.  If you want to cut up the carrots and potatoes while the meat is browning, be sure to store the potatoes in a bowl of cold water until you’re ready to add them to the pot.  They will turn a very unappealing gray-brown if you don’t.  You can cook everything in a slow cooker if you prefer, but 1) I do not have one and 2) the meat and onions benefit from a thorough browning and 3) the deglazing/reducing of the wine is essential to build flavor.  Crock Pots won’t allow you to do those things, as wonderful as they are.  Make this on a lazy day when you have a few hours of at-home time.  Leftovers reheat beautifully. 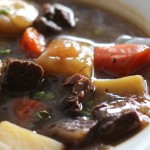