That was my nickname growing up. I even had a tiara which I wore to all family functions. It was cute, and although I was a moody skootch (Love that word – thanks, Denise!) I still loved my family to death and did everything I could to be helpful.

But there was a cloud of annoyance, irritation.   “You want me to do WHAT with the kids? Ride the Sesame Street roller coaster? OH JOY!” Ask my aunts what they remember of me (the oldest of 6 very close cousins) and the rest of the kids at the Orange County Fair and they’ll tell you, “Kasha rolling her eyes and saying BOOORRRRIINNNGG every time the ride came around.” But I held on to those boys, pretended to enjoy, and they had a good time despite my 12 year old self being a tool.

And if there are 12 year old girls that AREN’T tooly much of the time, I wanna meet ’em.  (That’s me in fourth grade… I even LOOK tooly!  Probably because Mom made me get a Dorothy Hamill haircut for the umpteenth time.)

But then the unfeeling, uncaring, cold-as-ice elderstateswoman of the family had a baby.  That changed everything.

Good God Almighty, NOT AT TWELVE!

Everything you know changes the minute they put that teeny bundle of helplessness in your arms.  It’s like nothing you ever imagined.  Just when you think they’ll never be out of diapers or learn to talk they’re whipping out their equipment and peeing all over the sidewalk.

They also won’t shut up.  EVER…  Apparently we have a ‘chatting issue’ at school.  The Boy is having a banner year academically, but he’s keeping other children from doing the same because of his talking.  We’re working on it.  I even give him ‘time outs’ at home where he CANNOT SAY A WORD for ten minutes.  By that eleventh minute I swear he’s ready to explode.  But sometimes mommies need silence!

And sometimes mommies need to know that all of their sacrifices have been worth it because they raised a considerate and caring child.  Case in point:  it’s not uncommon to find my lovable little man, nearly up to my chin in his 7 1/2 years, stroking my hair and handing me tissues when I cry or kissing my temples when I have a headache.

Motherhood is a give and take, a wonderful give and take.  You give of yourself for decades, sometimes feeling as though it was all for naught.  Then the day comes when your child is a parent and  you find yourself being called grandma and all is right with the world.  It gives you a totally new perspective and positive outlook.  According to my mother, the only reason to have children is so you can have grandchildren.

So in that spirit, I give you Mom’s Birthday Lemon Meringue Pie(s).  You see, my mother doesn’t like cake.  She does, however, adore lemon meringue.  Every year for her birthday I make TWO pies… one for us to share in a party-like atmosphere and another for her to inhale privately.

I was a bit disappointed with the results, however.  The pie looked great and was completely chilled but was runny even the next day.  That did not make for attractive slicing.  I vented my frustrations to mom telling her “I used your recipe (from the cookbook I stole from your house right from under your nose)”

Screw tradition.  From now on I’m going with my basic lemon curd recipe , a prebaked (homemade) pie crust, and meringue and calling it a day.  Sometimes you just can’t go back.

Spreading the mass with softened butter…

Sprinkling it generously with cinnamon-sugar, cutting out cute little shapes and baking them in a 425° oven for 10-12 minutes. 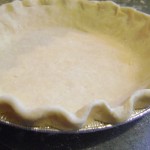 One thought on “Ice Princess”