I grew up on store-bought croutons from a box.

I sprinkled them atop iceberg lettuce in a turquoise Tupperware bowl and doused the mess with bottled French dressing. The rest of the family was content with homemade ‘Russian’ dressing: mayo, ketchup and sweet pickle relish.

Isn’t that kinda like Big Mac sauce? I haven’t had a Big Mac in years! I’m guessing, though, that like everything else made today, they’re not as big as they used to be.

Except hearts… hearts are as big as ever and filled with much love.

Case in point: The Boy

After a particularly rowdy day – the last day of winter break to be exact – I was having trouble getting the light of my life to settle into bed.  We did the bath, brush teeth, read book thing and he was still restless.  I get it!  I was 8 once, too, and that fact still blows my child’s overactive mind.

So there I am in the baby blue room surrounded by Legos and Beyblades and Pokemon posters trying to corral a boy who does NOT want to go to sleep.  Exhausted, as most parents were at the end of this vacation, I decided it would help my cause to slide into bed next to him and snuggle.

It was almost like trying to stifle one of those incessant tickles in your throat.

Toss, turn, wiggle, giggle… I even tried that mommy trick of putting a heavy hand on him – just resting my hand firmly on his shoulder/back and trying to calm him down that way.  It worked.  For all of 10 seconds.  Then *swoop* he rolled over from spooning to knees-to-knees, nose-to-nose.

“Thomas, just close your eyes and rest, honey.  Tomorrow will be a very long day if you don’t get to sleep soon.”

I closed my eyes, too,  hoping to be a good example.  I settled in and waited in silence.   A minute went by and I slowly opened one eye to peek at my child when I spied two big, bronze-brown eyes staring at me.   I startled him; he thought I was asleep.

“Thomas… why are your eyes open?”

He touched my cheek with his little (dirty-under-the-nails-despite-bathing) pointer finger, then sighed deeply, rolled over, and was fast asleep before I was able to remove my ample body from his twin-size bed.

It was a good night to be a mom.

I was hoping all that swooning over my beauty would give me a little power and I could get The Boy to eat his dinner the next night without issue.  I was wrong.

Well, at least he’s polite about it.

So, I had all the croutons for myself.  No prob.  They were delicious with romaine,  sliced onion, kalamata olives and Greek dressing.  I made a gorgeous batch of Garden Pea Soup the next day and sprinkled them over each serving for crunch, since there were still plenty left (an amazing feat in itself because I had snacked on them every time I walked through the kitchen).

As simple as they are to make, croutons don’t have to be boring.  The basics are here and the possibilities for embellishment are endless.  Grab yourself some bread – really, any kind will do as long as it is fairly substantial.  Here, I used a standard Portuguese roll from the supermarket.  Great bread makes great croutons, so I’d shy away from light ‘n’ fluffy sandwich bread – you know, the kind that gets stuck to your teeth when you make a PB & J.

Use a serrated knife to cut the bread into cubes – the size of the cube is up to you.  Teeny, tiny cubes cook VERY quickly and are absolutely adorable sprinkled over a mug of steaming tomato soup.  I’d like to go all teacher on you and say, “make sure your bread cubes are all the same size so they cook evenly”, but that’s just being ridiculous.  Breads, unless baked in a lidded pan (very cool, btw), will have at the very least a rounded top and you will never have perfectly-cubed cubes unless you’re wasting bread!

I used my new-ish Lodge dutch oven to melt some butter, then added an equal amount of olive oil.  For about 4-5 cups of bread cubes, I used 1 tablespoon of each.

At this point, you can season the butter-oil with whatever you like – just stir the additions in before adding the bread cubes.   What you add really depends on your tastes and how you’re going to use the croutons.

I threw the cubes into the pot and tossed them around for about a minute.   I know, I know… sounds like overkill.  Be thorough.  You really want the cubes completely coated with butter!

I spread the buttery cubes out onto a sheet pan and sprinkled them with salt and pepper, then baked them in a preheated 375° oven.  These one-inch cubes baked thoroughly in 15 minutes (I tossed them around twice during the cooking process).  Smaller ones would obviously take less time, larger ones would take more.

Store the cubes in an airtight container for several days.  If they last that long. 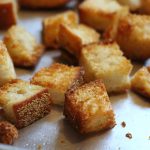 9 thoughts on “Back to Basics: Homemade Croutons”