Yes, that means my mother…. and at times she does indeed bore me.  And me her, I’m sure.  But it’s give and take and that’s what makes the world go ’round, right?

Like THIS for example.  I’m so glad I taught my little beast his letters and now he can use them to his advantage.  Or so he thinks.  I found myself staring at THIS lovely display two nights ago.  Everything is spelled correctly, too, so I guess my job here is done.  BAER.

Back to Mom.  Monday was her birthday and, being the wonderfully thoughtful daughter that I am, I made her favorite soup.  “Kasha’s Potato Leek Soup” has been a staple both in our kitchens and at the market stands for over a decade.  It’s very simple and basic, but you MUST use the freshest, top-quality ingredients.

The key to the creaminess is probably not what you’d expect, however.  No fresh heavy cream in this soup…. it’s evaporated milk!  You know, the canned stuff.  Between that, and the pureed potatoes and celery root, you end up with a rich, silky-smooth and practically voluptuous mixture that warms the body from the inside out.

When I was a freshman in high school I took Home Ec.   Do they even DO that anymore?  My teacher was Mrs. Costa and she  was already a veteran in the classroom at that point.  My neighbor, who graduated in 1973, had her as well, and heck… this was 1985.  I wasn’t exactly new to cooking, but I wasn’t nearly the ‘culinarian’ (or food snob) I am now.

At 15, I knew plenty of food trivia, methods and recipes, and miscellaneous details like the number of tablespoons in 1/3 cup (5 2/3 or 5 plus 2 teaspoons), and I had a collection of old cookbooks that were given to me by an old baker in my extended family.  Some of them date to the ’40s and ’50s.  The recipes are mostly outdated (because NOBODY makes aspic anymore), but the illustrations are funky.  Ancient black and white photography doesn’t do the food justice, either, sadly.

So Mrs. Costa and I bonded over food (and sewing and all the other very important and oft-forgotten domestic arts).  I know…. I’m weird.  But I can sew a tablecloth and then cover that table with all manner of both hearty and special occasion dishes so hush.

She had heard that Shop Rite was sponsoring a cooking contest, “Kids in the Kitchen”, and she gave me the details thinking I might be interested.  Sure!  How hard could it be to pack a bunch of Shop Rite-branded crap into a dish and have it come out edible?

And thus was born, Kasha’s Chicken Pot Pie.  It was standard fare, poached chicken, frozen veg (peas and carrots!), diced potatoes and a store-bought crust (which no matter how badly I roll out a crust I would never THINK of purchasing now … oh, and I’ll add this: I have topped the mixture with those canned biscuits instead of pie crust or puff pastry.  It was delicious that way too!).  The kicker, and what made it unique, was my sauce.  The white sauce was more of a velouté-bechamel hybrid.

Velouté is a sauce made with chicken, veal or fish stock and a roux (butter, flour, cooked a bit).  Bechamel is the same deal but made with milk, what you would use for a killer mac and cheese.  My pot pie sauce was made with chicken stock (I’m SURE I used ShopRite brand bouillon cubes, but I’d use the chicken poaching liquid if I were to make it now.) and (here’s the secret) EVAPORATED MILK!  Don’t knock it until you’ve tried it – it’s awesome.  And now I kinda want a pot pie.  Without the chicken.

So that sauce was the jumping off point for my soup about a decade later.  Potato leek soup has been Mom’s meal of choice for special occasions, or when she’s feeling pouty and wants to bust my chops.  Since this year I didn’t make her absolute favorite  lemon meringue pie (one for the family to celebrate the occasion and another for Mom to savor on her own for the next 2 days), I made her 3 half-gallon jugs of this soup.  Mother Nature is cooperating nicely, and keeping things bitterly cold and windy — perfect soup weather!

Heat a stock pot over medium heat and add the butter and oil.  Drain the leeks well (pull them out of the water and drain in strainer, do NOT dump them – any dirt in the bowl will stay with them!) and put into pot.   Season with salt and pepper, and keeping pot on medium heat, let the leeks ‘sweat’ until softened, stirring often.   You don’t want them to brown or the soup will be discolored.

Once leeks are soft, add the celery root, potatoes and stock.  Add about a teaspoon of salt, but less if your stock is salty. Bring to a boil, then reduce heat and let simmer for about 20 minutes (depends upon size of dice), or until potatoes and celery root are quite tender and nearly falling apart.  Puree with a stick blender (or regular blender…. just BE CAREFUL!), then stir in the evaporated milk.  Taste for seasoning and sprinkle with a bit of celery seed when serving.   **If you like, reserve some of the diced cooked veggies before pureeing and stir them back in later.

Oh, I forgot to finish the contest story!  The recipe was sent in and after weeks and weeks I got a notification that I was a finalist and would I please prepare my dish and bring it to the Colonie Mall in Latham (Albany) on this and such a date.  So I made my dish and tried to keep it hot for the two-hour drive to our  fine state’s capital.  The dishes were lined up on tables in the middle of the mall and eventually sampled, presumably by men and women with iron stomachs.

I didn’t win top honors, but I was a runner-up, and I was thrilled to receive a $50 savings bond, which I happily cashed in 7 years later for gas money to get me to college. 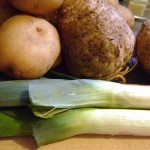