October for farmers is like May for high school seniors.  You get a case of the screw-its.  Or the more vulgar f%#&-its.  Or just ‘senior-itis’.  You remember —- all the learnin’  you needed to do is done.  Graduation is just around the corner and nothing you do now can mess that up.  You’re walking regardless of whether or not that book report was handed in.

So here we are in October, with 2 markets finishing up this week.  It feels good.  REALLY good.   We’re doing a CSA this winter, so that needs to be done every other week, and we still have one market that runs until Christmas and a bunch of wholesale business.  But for the most part, now is the time when we get tired.  Oh. So.  Tired.  You actually start to look forward to a frost come mid-September, just so you can slow down a bit, even if that means all the summer crops will be turned into compost.

Just get through this week…. Get through the long week of preparations for bulk buying because you won’t see many of these customers again until May.  And then it’s over.   Your workload has been cut down by a third and YAY!  You can chill out with a cup of coffee after The Boy gets on the school bus.

Need I say that my poor baby has been feeling a little neglected of late?   It’s been a long season, and he’s worked nearly every Saturday in Ringwood.  Seriously.  He WORKS.  Filling tables, bagging veggies, making ‘trades’ (what?  a bunch of cilantro for brownies, blueberries, cider and a bag of apples is fair, isn’t it?) and deliveries to other vendors.  That kid OWNS the joint on Saturday mornings… or so I am told.

Because he’s been a little blah, I decided we’d make some special holiday cookies.   I dug out my favorite sugar cookie recipe and grabbed the orange decorating sugar and we had a blast for much of the afternoon.  This was after we had watched a kids Halloween movie on Nickelodeon.

In the movie, a woman’s car had broken down and she got out, saying, “I’ll just go wiggle my doohickey and she’ll start right back up!”.  I chuckled, because I have the sense of humor of a 12-year-old boy.  Or even a 6-year-old apparently… because as I was laughing, Thomas motioned down by his crotch and said “I’ll wiggle MY DOOHICKEY!”

I had  no idea what to say, other than, “that is completely inappropriate and those things are not to be said in school.  Although I thought it was downright hilarious!”

Now, Halloween has always been a biggie in our house.  Sure, we get caught up in the farm and forget until the last minute, but we ALWAYS have a boatload of candy to give out.  And I’m not talking some crap generic candy.  No dumdum pops here!  We get a dozen or more bags of the miniatures that we all love to eat (just in case we don’t give it all away!) and give it out to those brave enough to say ‘trick or treat’ at our markets.  Many even come in costume, as do we, and it’s just so much fun to be silly.

I come from a long line of pranksters, and Halloween is as good a time as any to pull a good one.  Most every year, a certain aunt who lives next door yet shall remain nameless, dresses in costume and plays mute while trying the scare the living daylights out of us.  Sometimes she gets us, but one year, we got her.

You see, she loves to do up the yard in style come fall-time.  Halloween decorations are everywhere, dozens and dozens of pumpkins lining steps and porches and yard borders.  We joke about all her stolen pumpkins, and who knows, really?  It’s not unheard of for people to sneak into your fields at night and take whatever they can carry.  But more often than not, when it’s a good friend or neighbor, the deal is ‘wait until I sell what I can, then take what you want.”  We’ll stick with that story so as not to incriminate… or risk the wrath of the Swamp Lady, because Halloween is still a few days off.

Since we joke about her stealing all the pumpkins, we thought it would be a great idea to turn the tables and STEAL HERS!  So when she left to go grocery shopping one morning, we took a forklift and a giant pallet box (You don’t have these things to aid in practical jokes?) and grabbed every pumpkin off her yard, then hid them in the barn.  She came back within a half hour or so, and  we watched from the garage across the street.  She went into the house, then came back out to get more groceries, then back and forth a few times and never showed any sign that anything was wrong.

We were chomping at the bit here!  A little while later we get a phone call…. “Sonny!  Did you see anyone by my house?  My pumpkins are missing!”  We all had quite a laugh over this, especially when she said she walked past the spots where pumpkins should have been at least three times before she noticed!

In our house, Halloween means westerns for dinner.  Think western omelet but served as a sandwich!  It’s so good… so fried, and crispy and delicious!  Every year we hassle mom to make them, and every year she does, just so we don’t bitch.  Plus we tell her it’s ok to take a few hours off in the afternoon so she can make them for us.  Because she needs permission ya know…. BAER!

Why are they the Halloween staple?  Well, they use onions and sweet bell peppers, both of which we have in abundance at this time of year.  Plus, they contain ham and eggs (cheap), so the protein is good.  And they’re portable.  What’s better than a sandwich that you can walk with as you trick-or-treat down the road?

If you have the inclination, I strongly urge you to try these.  And don’t worry about the eggs/oil/cholesterol.  It’s only once a year, afterall.  I have raved about them so many times to my friend Fletch and I doubt he believed they could be as special as I remembered, because you know, things are never as good as they used to be.  But then I made them.  And we ate them together.  Ketchup-y fingerprints on the white bread, mouths full and lips greasy as we closed our eyes and sighed… “OhmyGodtheseareSoGood!”  And they were.  Just like I remembered.  For him, they tasted like a great western omelet sandwich.  For me, they were a brief leap back to 1980, except I wasn’t going to be filling my belly with Peanut Butter Cups and 3-Muskateers after dinner.

Don’t you just love how food can do that?

Pour about 1/4″ oil into shallow pan and heat over medium until it starts to ripple.  Crack eggs into a large bowl and beat until streaks of white still show.  Stir in veggies and ham.  Season with salt and pepper.  Spoon a bit of the egg mixture into the hot oil, about 3-4 ‘mini omelets’ per batch.  Flip carefully using a fork and spatula.  Remove to paper towel-covered sheet pan and keep warm in low oven until remaining omelets are made.   Add more oil as necessary.  Yes, it will seem like a lot.  Relax. 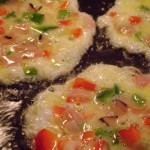 7 thoughts on “Boo! It’s Halloween! …or It’s Your Cholesterol”