…. works to MY advantage!  I feel such a surge of power right now.

Guess who came home yesterday to a phone message saying, “It’s Halloween, so the westerns are being made right  now and will be keeping warm in the oven whenever you’re ready to eat”?  Heh heh heh.  Thanks, Mom!

They were delicious.  *sigh*  I eat them open-faced, usually, as I’d much prefer to stuff myself full of greasy, eggy goodness than soft bread.  I had 2 sandwiches with 3-4 westerns on each, the last sandwich consumed while I took Thomas to get a warmer jacket because it was so friggin cold.  I ate a few peanut butter cups afterward, so my ‘Halloween of yesteryear’ was complete.

After I posted my last blog, I commented to my aunt that she should read it since she’s a star player.  That was at 8:30am.  Around 2pm, she came down to the barn with a few grandkids.  “Amy saw the blog.  When she saw the pictures of the westerns she said, ‘get chopping, woman!  We’re having westerns for lunch!‘  And they did.  And they added some diced cheese to the mixture (rumor is they were quite good this way).

My aunt said they were just like Babci used to make.  I had no idea THAT’S where they came from!  I figured my mom made it up, but she verified that she did, indeed, get the ‘recipe’ from her mother-in-law.  I love it when foods have a story behind them.  It feels so good to share that intimate part of our history with others, and oftentimes it lights a little fire in their minds (or hearts) and encourages them to share with us, too.

I know there are so many other things we used to share as a family.  My mom’s mother (Nana) always made corn pudding for Thanksgiving.  It was basically a custard with whole kernel corn mixed in.  It was like a crustless quiche and was served as a savory side dish.  I hated it.

Aunt Helen used to make macaroni and cheese and that was always a winner.  Aunt Pam’s onion soup (with that secret dash of worcestershire sauce) topped with toasted bread and melted swiss was a New Year’s Day staple.   Aunt Gerry was the pizza queen, and despite my prodding and whining, she STILL hasn’t made any for us this summer (which is quickly fading to winter… GERRY!).

Mom has her things, too, of course.  Everyone raves about Doris’ pumpkin pies.  I know she uses a standard recipe (not from the can), but when a woman makes a dozen at a shot, over the course of a few decades you figure she’s reached perfection.  And she really has!

The page in her cookbook has the ingredient measurements multiplied for everything up to 12 pies.  She’ll make all the dough first, enough for 2-3 dozen pies, then refrigerate the thick rounds  wrapped in plastic wrap.  While they’re chilling, she makes the pie filling.  All those eggs,  the sugar (which I’m still blamed for forgetting when I helped Mom make the Thanksgiving pies… when I was THREE!), the warm spices of autumn… every one brings to mind another memory of my childhood in the kitchen.

Mom can fit 6-8 pies in her oven staggered on two racks.  She’ll put the half-filled shells onto the racks, then use a large pyrex glass measuring cup to pour the thick, golden brown-speckled filling up to the top of the perfectly crimped edges.  As they cook, the filling looks as though it will spill right over the sides, but it never does.  Ever.  She’s got pumpkin pie baking down to a science.

After Halloween, our markets always slowed down significantly (This was like 10 years ago.  Now it’s busy until Thanksgiving and beyond.)  We needed something to fill in the gaps left by the end of summer crops, so we convinced Mom that everyone would like her pies as much as we did.  So she would spend every Thursday baking pies for Friday market.  Dad even made up special wooden crates that were just big enough to hold 2 9-inch pies or about 6 mini ones.  The mini pies were probably 4-inches across, but they were always single-serving.

We didn’t sell too many at first, but once we cut into one and gave away little slivers to sample?  Those babies FLEW off the table.  We always had a few people order them for Thanksgiving, and even years later after we stopped selling pies (rules…  bah!) customers remembered Mom’s pumpkin pies as the best they’ve ever had.  The best part?  They’re firm enough to eat out of hand!

Perfect.  Now I’m craving pumpkin pie and we’re still WEEKS away from Thanksgiving!  I wonder if THIS POST will get me a pie before then?  Whatdya think, Mom? 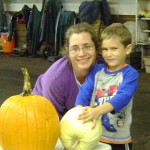 One thought on “Subliminal Messaging in Blogs”