About the Oatmeal, in just a bit…

Yep, I’ve been MIA for a while. Please accept my apologies.

I took a few days, went to Atlantic City and tried my hand at RELAXING! I’m totally not used to that and I have to admit, it felt good. It also felt like I need more practice!

Bubblebaths are nice when the hot water doesn’t run out. Moms (and the occasional dad) understand — by the time two loads of laundry are done, dinner is made, the dishes are washed and the kid(s) are bathed, not much hot water remains for a mother’s relaxing soak. The extra-deep soaking tub in my room was filled to capacity and I sat until I was pruney, reading my latest acquisition: As Always, Julia (a book of letters, compiled by Joan Reardon, to and from Julia Child and her dear friend and publishing advocate, Avis DeVoto).

We shared great food (some crap too, but that’s par for the course), wonderful company, and a ton of fun at the blackjack table. I have never played blackjack, but with a degree in mathematics I figured I’d give it a shot. I mean, how hard could it be to quickly add up to 21? If you’re a customer of mine at the markets you already know I’m   faster than any of the people we employ, even without mechanical assistance.

I’ve discovered there’s quite a difference between Las Vegas and Atlantic City gaming tables and dealers – and please, someone tell me if I’m wrong. In Vegas (granted, I haven’t been there in nearly 10 years), the dealers seem to be much friendlier and more open to explaining the games, more forgiving of errors — as long as they aren’t illegal. Maybe it’s the Nevada sunshine?

In AC, it was tough to find a table with a dealer who was willing to teach the rules of the game. Finally found one sitting at an empty table shortly after breakfast one day. It took some time to loosen him up, but with the help of a few strangers, Fletch and I were able to entertain ourselves for over an hour and still cash out a hefty sum, which was, of course, subsequently pissed away on video poker and roulette.

Upon arriving home, I discovered a sick little boy who needed not homecooking, but rather, TLC. And so he got it… Along with Jell-O, lentil soup (homemade, from the freezer) and fudgsicles.

My child, in nearly 7 years, has never once had strep throat. He runs a fever and BOOM! ear infection…. but never a throat thing. This time, it was strep. (and YAY! the nurse did the culture without making him throw up, unlike the doctor two years ago) It left as quickly as it came on, thankfully, and his body was better in 2 days.

This did not include his mouth.

It was back to being nasty days later thanks to an exhausting weekend and a few very busy days at school. I am always amazed at how kids act completely differently at school versus at home. The most polite and well-behaved children can be absolutely beastly at home! I guess that’s similar to us being unconditionally bitchy to our spouses and families… because they love us and accept us as we are and we can ‘let our hair down’ with them.  Right?

No, that wasn’t an excuse for the ‘mouthing off’ and blatant disregard for Mom’s admonishments to ‘stop shooting that styrofoam airplane at my television’. Simply a statement of observation that shows that this mother understands how being tired affects her little boy and makes him brave enough to actually look her in the eye while shooting a rubberband plane through the living room.

Tuesday’s market at the farm had a great turn-out, due in part to the wonderful weather we had. I also wish to extend many thanks to Patty. Her article in our local paper a few weeks back brought several new faces to our mini-market, most of which had no idea that such an abundance of wonderful locally grown vegetables could be available at this time of year.

In addition to the strep bug and the bug that apparently crawled up The Boy’s ass for a few days, I had mountains of farm work to do. Last week concluded our 2010 Winter CSA and market season and we had to clear the greenhouses of veggies to sell. We don’t mind doing lots of work inside the wonderfully warm greenhouse (91-degrees on Tuesday) when the temps outside are below 30.

So obviously, I’ve been busy – much busier than I ever intended to be in February – but such is life. You know the old saying, “when it rains it pours“? I think for parents “when you’ve got a full plate, the kid WILL get sick” is more apropos. I’ve found oatmeal to be a quick and easy thing for me to put in my belly on these busy days, even for lunch, and I threw together a delightful combo of oats, banana and walnuts that is absolutely delicious.

Well, it’s delicious to me. The Boy still turns up his nose at this one thanks to the banana. He’s an odd bird and doesn’t care for them. Must’ve OD’d as a toddler? Or perhaps he’s just being difficult.

Now for that Oatmeal 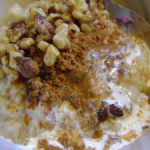 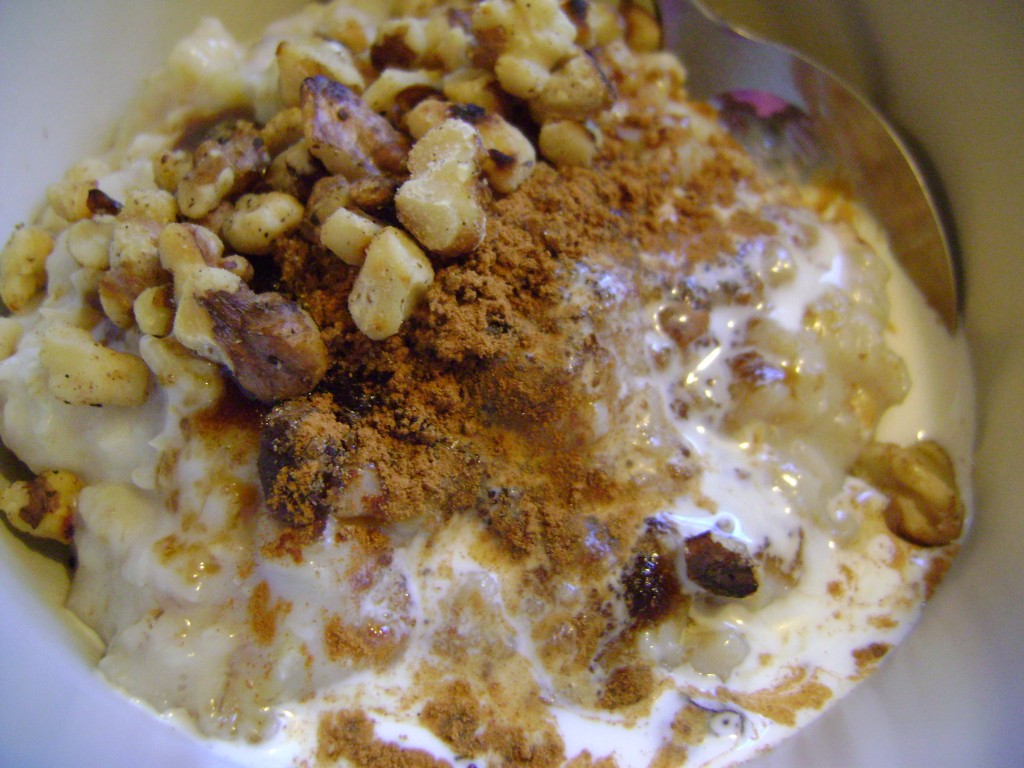 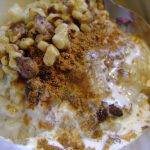 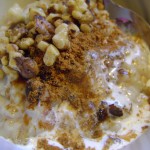