Friday, September 6th was the first day of school for my brand new fourth grader!  Both of us were very excited.  Thomas sat on the couch watching Spongebob Squarepants the morning before and said, “it feels like summer vacation just started!”

I gave him my best Mr. Roper look (you know, where Norman Fell cracked a joke and looked right into the camera and grinned?  Love that.)  but he must not have realized there was a joke hidden in there.  All he said was, “LUCKKKYYY!”

He’ll get the joke someday, but for today I let it slide.  I’m looking forward to Thomas learning a ton of great stuff in fourth grade.  He’s changing so much and that’s thrilling and humorous and makes me feel a bit melancholy for the days when all we had on the agenda was having breakfast and going to Target for diapers.

Now, we’ve got a list a mile long of things that we’ll never accomplish in the few hours we have together after school and before bedtime (because at nine, he still has a bedtime).

Parents complain endlessly, and quite justifiably, about how demanding babies and toddlers are, what with the diapers and  breast-feeding, the car-seat battles and constant snack requests.  But in retrospect, those troubles are small and those years go by so quickly.

I’m looking forward to spending more time with my darling boy since WE HAD A FROST THIS WEEK!

Did that sound overly-enthusiastic?  Probably.  But I can’t help it!  It’s a very long season on a vegetable farm and although we haven’t lost more than a few crops because of the 2-night frost event, this signals that there will be a slow-down to the non-stop activity.

Customers repeatedly ask when the <insert summer veggie> season will be over and I tell them, “when we have a frost or shortly thereafter.”

Not really.  We typically have a damaging frost by September 15th (this year it was the night of 9/16) followed by a few weeks of beautiful, sunny weather.  This weekend’s forecast is showing sun with temps in the upper 70s.

It happens every year.

We make preparations for frost, however, but you can’t cover up everything with row cover like we did with the peppers and zucchini.  We’ve got nearly 60 acres and that would be a lot of blankets and sheets.

We hope that the plants have enough leaf-cover to protect the veggies from harm until we can get them off the plants.  This year, the tomatoes and basil were shot long before frost, but the peppers and eggplant are still gorgeous.  We’re hoping to get a few more weeks of harvesting summer crops before we head into fall full-steam-ahead.

Right now, colorful peppers are in abundance at markets and if you see them, they will probably be cheaper than Holland peppers in February.  You should buy many and freeze them.  How do you freeze them?  Well, you slice them up (no seeds, please) and freeze them raw in bags or you cook them and freeze them.  Quite simple, actually!

I like to make up what I call “chili mix”:  Dice several peppers, including poblanos and jalapenos, onions and garlic and saute briefly in olive oil.   You don’t want them fully cooked.  Let them cool, then portion into freezer containers and label each one with a name and date.  Inside you have all the veggies you need to start a pot of chili, either on the stove or in the crock pot!  You can add some spices and herbs to it if you like, but I usually like to leave it plain in case I need to defrost a container to jazz up a frittata for a quick work-night dinner.

The recipe here today is a terrific, simple way to highlight the wonderful sweet red peppers that you find this time of year. I created it for a feature in Goshen Quarterly Magazine – a free publication that you can find at various Goshen businesses.  The online version isn’t up just yet, but please check it out when you find one.  The article highlights several Goshen Farmers Market vendors. 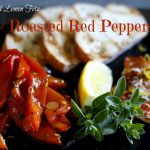 Betcha didn't know you could pan-sear feta halloumi-style!  It is fabulous!

** Core and seed peppers and roast them in a 375° oven for about 40 minutes or until skin darkens and peppers are soft OR grill them on a gas or charcoal grill.** Almost everything you need can be found at both the Goshen and Ringwood Farmers Markets: Peppers, Garlic, Oregano (Bialas Farms), Feta cheese (Edgwick Farm), Baguette (Janet’s Quality Baked Goods), Olive oil (The Gourmet Exchange – Goshen only). No one grows lemons locally.
0
0
0
Share on Pinterest 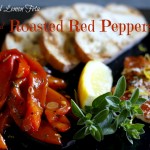