Sunday is often “Pizza Night” at our house, usually because we are out and about doing chores and such and the last thing I want to think about after a busy week with 2 farmers markets in a row (Friday in Goshen, Saturday in Ringwood) is planning a big meal.

This Sunday, however, we did not get take-out from our favorite place (Village Pizza, Goshen…. Sal is the sweetest man and loves our swiss chard!).  Fletch and I delivered some produce to Adams Fairacre Farms in Newburgh and we kinda shopped around.  I saw some pizza dough in the refrigerator case and thought that would be perfect for a quick dinner.  It just so happened that I had a block of mozzarella in the freezer AND a pint of homemade marinara as well.  Add to that some caramelized onions, fresh mushrooms and parmesan cheese, and we’re talking seriously good grub!

Not only was it a good FOOD idea, though.  It was a GREAT way to occupy a 9 year old boy on a rainy Sunday afternoon!

I set the pizza stone in the oven to heat – it was a cool, rainy day so this was ok.  Had it been  any warmer, though, the pizza would have been made on the grill.   I cleared the kitchen table, set out the flour crock and rolling pin and instructed Thomas in the rules of gluten.

He had no trouble hamming it up for the camera.

Once the dough was rolled out Thomas decided he wanted a bigger, puffier crust.  No prob!  I had him fold the outer edge of the dough over onto itself and press it tightly so it made a rim around the pizza.  He topped his mini pizzas with sauce, cheese and mushrooms.

The pizza stone (it’s not dirty, it’s well-seasoned) was heated in a 450° oven for at least 30 minutes before the first pie was slid onto it.  This one baked for approximately 12 minutes.

…and it was perfect!

As was this 1/2 mushroom and onion, 1/2 plain.  I brushed the edge of pre-baked crust with olive oil before dusting it with kosher salt and dried oregano.

This focaccia is the same purchased pizza dough that I flattened to about 3/4″ thick. I poked my fingertips into the dough until it was dimpled all over then topped it with some caramelized onions I found in the fridge.  I drizzled it with olive oil and sprinkled with dried rosemary, kosher salt and freshly ground black pepper.  About 12-15 minutes on the stone and it was good to slice and devour.  As an accompaniment to your favorite soup, I think this would be outstanding.

You thought I was going to use fresh basil somewhere on these pizzas, right?  Because of that picture I posted in the beginning?

Nope.  I didn’t have any in the house.  It’s growing, about 200 feet from my kitchen, but it was raining and I was feeling lazy and there wasn’t a snowball’s chance that I was walking that far to get basil when I had dried oregano and rosemary within arm’s reach.

We’ve got a greenhouse full of fresh potted herbs right now.  It’s what we grow in the beginning of the spring/summer farm season because the weather is too uncooperative for us to be able to grow much outdoors.

Caring for those herbs (20 varieties!) requires constant watering, feeding, and trimming so they develop a substantial heart.  If you allow the herbs to grow without trimming they will get ‘leggy’, meaning they’ll have very skinny, sparsely-leaved stems.  We want lots of leaves because that’s the usable part of the plant, so we trim them back – giving them a haircut, basically – and the plants grow more stems from each leaf node.  Much easier to describe in person, for sure, so if you see me at a farmers market, ask me for a demo.

That said, when we trim the herbs, I have a terrible time throwing away all of those trimmings!  My mind races with the awesome things I can do with fresh herbs, but somehow times gets away from me and I end up eating leftovers 3 days in a row.  But I’ve still got all those herbs!

Sprigs of rosemary, oregano, sage, thyme – those are the ‘woody’ type herbs that we’ve been trimming lately – have been bundled together with rubber bands and they are currently hanging from the upper cabinet door pulls in my kitchen.  In a week’s time they will be dry and I can shove them, stems and all if I’m feeling lazy, into clean, old jelly jars for use later.

If you grow one herb plant and trim it regularly, it will grow back stronger and healthier than if you left it alone. You will have plenty for fresh use and probably enough to keep you in dried herb for an entire year or more.  It’s a huge value and since herbs are so easy to grow in pots, I thoroughly endorse the patio kitchen garden concept.

And because that’s not quite enough, our other two greenhouses are home to seedlings of various ages and stages and when their time is right, they are planted in the fields.  We put out (planted outside) about a 3500 pepper plants last week and about 5000 tomato plants this week.

That oughta prove for a fun ‘pick your own’ event, huh? 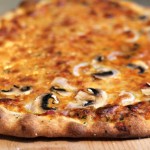 4 thoughts on “Pizza Night at the Farm”