The boy shows off his skills with Tacos, and his kitchen savvy!

SWF with brain (and she’s not afraid to use it!), with child (ditto), and with snark (well, this is getting repetitive) apparently seeking SOMEONE by blogging. 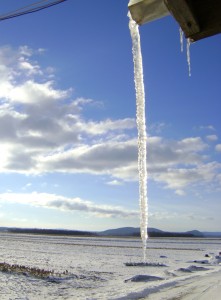 Or so says my WordPress ‘dashboard’.  The Dashboard tracks statistics such as daily views, links clicked and how the blog was found.  The Google searches that have come up can be comical: eporn farmgirl cloves, do you need to wash kasha,  pinafore sauce.  This week?  “Farmgirl dating”.

I’m sure this person (No, it doesn’t say WHO so relax and Google away.) was looking for ‘jokes about the farmer’s daughter’ or the like, and was driven here by mistake, but it still made me chuckle.
In other news, the New Year has brought about a New Attitude around the farm.

In other words, I have a 6.5 year old with an attitude… and I’m not going to let it affect mine this year!  You know what I mean.  The kids won’t get out of bed (this he does without issue, thankfully), they won’t eat their breakfast, they won’t get dressed, or brush teeth, or wear a hat because you lose 40% of your body heat through your head, dagnabbit! 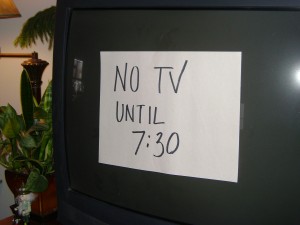 And nagging and yelling and even DOING if you have to doesn’t make for a very happy mommy.  It ruins your day, right?  It really puts a negative spin on things and who needs THAT first thing in the morning?  Not.  Me.  So I’m making an extra effort this year to avoid the nagging and yelling by simply taking things away from the young man who has whatever he wants (except for a big brother).

His kryptonite?  Hearing me say, “if you don’t (fill in blank) right now, there will be no TELEVISION.”  You’d think I’d shot him with poison darts or something, the way he throws himself on the couch screaming.  With his off-the-cuff displays of histrionics, I’m tempted to put him on a bus to the city and let him pick up a slot at an Improv comedy club.  At least he’d get paid and could then give me a little compensation for all the effort I put into making sure he DOESN’T watch tv because, let’s face it, it IS easier to give in than to hold firm to our threats.

Just this morning I was met with, “because you said so isn’t a good reason” (SNOTTY-POUT).  Actually, it IS… because I’m your mother.  When you’re a dad, you can do the same thing to torture your children, and look how much I’m teaching you!  All’s well that ends well, right?  And it was fine, and typical, and it didn’t ruin my day.  YAY ME!

Sunday afternoon is my time to watch my favorite cooking shows on PBS.  I get tired of the Food Network celebrity chef crap.  I just prefer the PBS shows to the other networks because they seem a little more ‘serious’ about cooking.  So, I reminded Thomas that at 3:30, the tv is mine.  NO PROBLEM, right?  HA!

“YOU NEVER LET ME WATCH MY SHOWS!” I hear this muffled, squeaky little voice coming from underneath a sofa pillow.  Whatever…. I turn on Mexico: One Plate at a Time and we see a guy cooking tacos along with a young girl.  I tell Thomas, “I’ve been watching this show for years and the chef always works with his daughter.  Do you think you and I could do a cooking video together?”  “Sure”, he sulkingly replies. 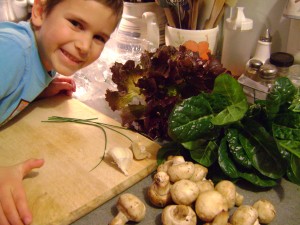 Ugh.  IGNORE.  I had to get some veggies for dinner, and count to 10, so I went to the barn.  Five minutes later I return to Thomas telling me, “I think we should make tacos for dinner.  This guy made some with swiss chard and chicken and they looked really good… except for the chicken.”  He was so excited and happy and this in turn made me excited and happy, and I graciously put my Thai Curry Squash Soup on hold in favor of Tacos de Tomás. 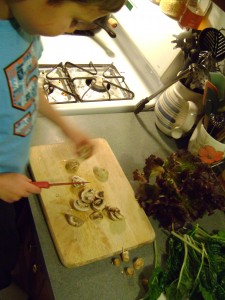 He couldn’t get his shoes and coat on fast enough, and ran out to the greenhouse to get some swiss chard.  I opened the door to find him standing  in front of the bed with hands full of baby chard, complete with dirt-filled rootballs and yellow leaves attached.

I showed him how we usually CUT the chard instead of pulling it out, because the hearts will grow back and we can have MORE chard in a few weeks (or at least by springtime if this weather doesn’t warm up a little!).   We wandered around a bit, tasting as we went, and he decided chard and “fire” lettuce were all we needed.  Sorrel garnered quite a sourpuss, though, when he expertly tore off a leaf took a taste of it.

Back at the house, after a serious hand-washing event (“How high do I count when I wash my hands?”  30.  SLOWLY!), Thomas pulled his stool up to the counter and started washing and chopping the veggies he needed for his creation.  He was very deliberate as he pulled things from the fridge.  The Boy knew what he wanted and what he thought would taste good.

Thamas started chopping the mushrooms while I heated a bit of oil in the pan.  I have shown him when making pancakes how you sprinkle a tiny bit of water on the griddle to see if it ‘dances’.  That means the pan is hot enough!  It did, so it was… and he tossed in the mushrooms like a pro.  They sizzled away when they hit the oil and the hot pan.  “That’s the sound I like to hear!” he said.  That’s my boy!

I chopped the garlic and added that to the mushrooms while he cut up the swiss chard.  It was baby chard, so he cut each little bundle into 3 or 4 pieces, then stirred them into the mushrooms.  It only took a few minutes for the vegetable mixture to cook, then I removed it from the pan and kept it warm.   Meanwhile, I got some tilapia fillets, seasoned, and sauteed them.  TC is a purist, so his fish was seasoned only with salt and garlic powder.  I prefer to dredge mine with a southwestern or fajita seasoning (Penzey’s is my favorite purveyor).

At this point, I received the most important instruction of the night: how to heat the tortillas.  Thomas remembered all the details he learned from Chef Bayless, and he followed them precisely.  Place your tortillas (we did 6) on a paper towel and fold over the corners to make an envelope.  Flip the ‘envelope’ over and put it in the microwave for one minute.  That’s it!  And now we assemble…. 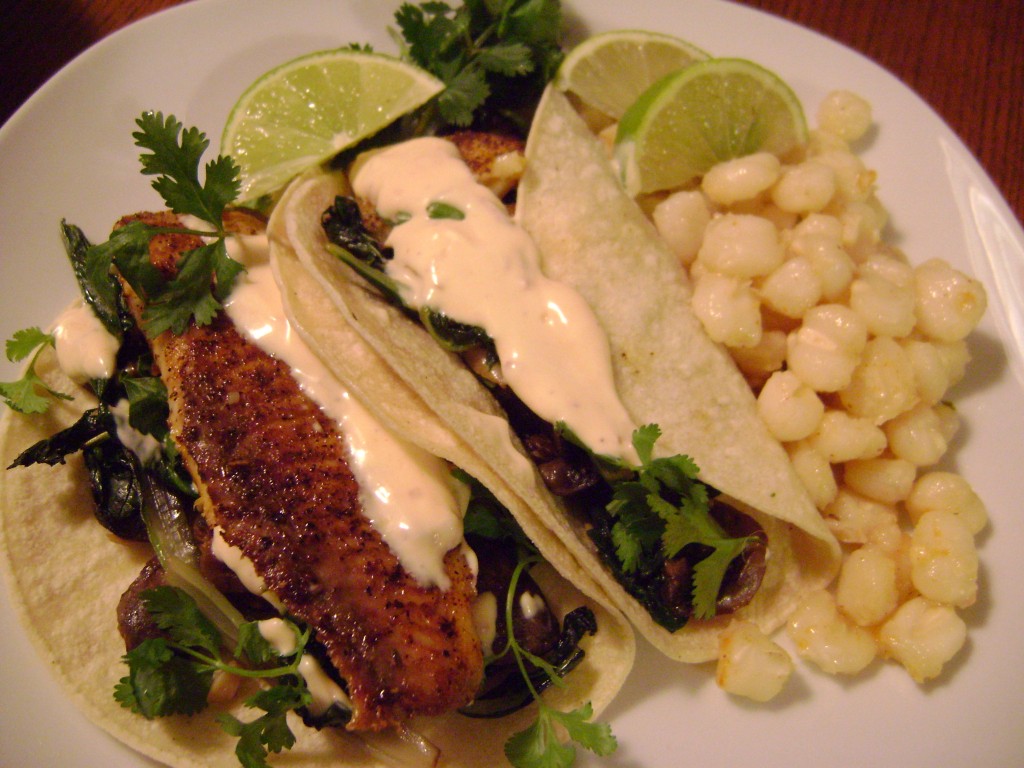 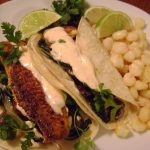 Pull up a stool and let the kids help!  Getting them involved makes them more likely to be adventurous and open to trying new things, plus it teaches them that dinner just doesn’t magically appear on the table! 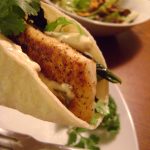 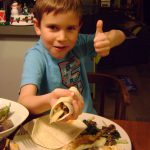 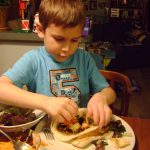 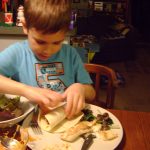 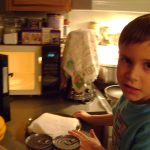 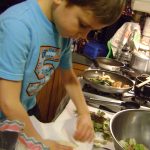 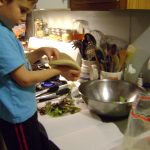 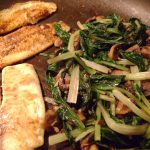 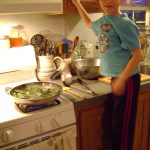 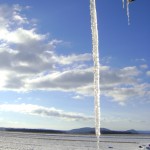 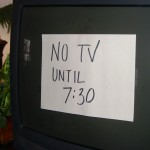 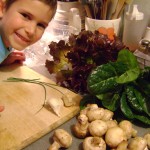 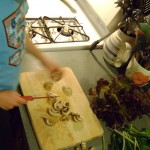 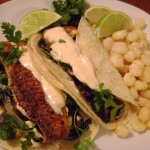 6 thoughts on “Sunday Nights Were Made for Tacos”