Leeks, like their cousins shallots, onions and cippolini, are a staple in many dishes. The alliums mentioned each have a slightly different texture and flavor, but rarely serve as the main ingredient in a recipe.

Enter the Leek Tart. I first tried this several years ago – got the recipe from The Joy of Cooking. Back then I couldn’t make a pie crust to save my life. Somehow, though, over the years, I’ve gained my mother’s ability to whip together a crust, roll it out (ok, it’s still never a circle, which the math geek in me HATES) and have it baking in under 30 minutes.  I doubt, though, that I’ll ever be able to have my personal pie crust assembly line like Mom always did around Thanksgiving.  Maybe I just had to turn 40 for it to sink in?

If you’ve ever eaten anything with caramelized onions (and you really should have tried this when we had tomatoes) you know just how sweet and luscious they become when cooked down slowly.  That right there is the key – slow cooking over low heat.

You start to ‘sweat’ the sliced alliums (the common botanical name for onions of all kinds) over medium heat with some olive oil or butter and a bit of salt.  You DO NOT WANT THEM TO BROWN.  They tend to get bitter if they burn, so be careful.  Once they release some liquid and start to glisten (they really do look lovely), turn the heat down as low as you can get it and let them cook, sometimes for as long as 30-45 minutes, stirring occasionally.

Once cooked down, the caramelized 0nions or leeks will last for days in the fridge, which is good because it’s worth the effort to make these in bulk.  Add them to sandwiches, omelets, baked or mashed potatoes, salads, dips and spreads, top a burger, etc and you will not be disappointed.  And if you don’t have the time to do all the cooking now?  Slice and wash those leeks and freeze them in a Ziploc bag.  All you’ll need to do is grab a handful!

Gather about 3 lbs of leeks and remove the dark green parts (discard, add to compost pile, or clean well and use to make a stock).  Slice leeks in half and remove the root end.  Hold under running water while ‘flipping’ the leaves of the leek with your thumb.  Any dirt should wash away.  Cut into 1/4″ slices.

Alternatively, slice the leeks and let swim in a big bowl of cold water.  Lift out the leeks after the dirt/sand has settled to the bottom of the bowl and drain well in colander.  DO NOT POUR EVERYTHING THROUGH THE STRAINER.  You will essentially shower your clean leeks with the dirt you tried to wash off.

Pile the leeks into a large saute pan and add a couple of tablespoons of butter and/or olive oil.  Place over medium heat and let things gradually begin to heat up.  You want a gentle cooking, not a furious sizzle, so once the leeks begin to glisten and cook down, turn the heat to low.  Season them with salt and pepper.

You want the leeks to continue to wilt and not burn or brown.  Allow this gorgeous mixture to cook over low heat for about 30 minutes, stirring frequently (every 5 minutes or so).  Once the leeks cook down by about half and are all sweet (you must taste them – you MUST!) and luscious and soft, turn off the heat and let them cool.

If your pie shell is ready and your oven is preheated to 400°, you can go right ahead and make t

he tart.  Or you can store the cooked leeks in a covered container in the fridge for about a week or so.

Load up your unbaked pie shell (homemade is great, but storebought works just fine) with all of the cooked leeks.  In the photos above, I did a double batch of both pie dough and leeks – this made a 9″ x 1″ high tart and 2 – 6″ x 2″ high mini tarts.  If there is any liquid remaining, do NOT put that in the shell.

In a bowl, beat  1/2 cup heavy cream and 2 eggs with a fork or whisk until combined.  Season with salt and pepper and pour over the leeks.  The pie shell will be quite full.  Press down with a rubber scraper and wiggle the leeks a bit to get into all the nooks and crannies (Now I’m craving English muffins.  Damn.).

Bake the tart(s) in a preheated 400° oven for 20-30 minutes or until golden brown and knife inserted in center comes out clean of goo.  Let it rest at least 10 minutes on a wire cooling rack, then dive in and enjoy all your hard work.

Leftovers (really?) will last, well-wrapped and in your fridge for about a week.  Neighbors will undoubtedly stop by to sample.

Word of caution: if you happen to notice that your oven temperature has dropped to 200°, the tart will take longer to bake.  If you then realize that it was your belly that ‘adjusted’ the oven knob when you reached into the upper kitchen cabinets, you’ll probably not want to eat much tart.  That desire to abstain will leave you quickly once you taste it. 🙂

Original recipe adapted from The Joy of Cooking, but most every quiche base is pretty similar and fillings can be varied to suit you. 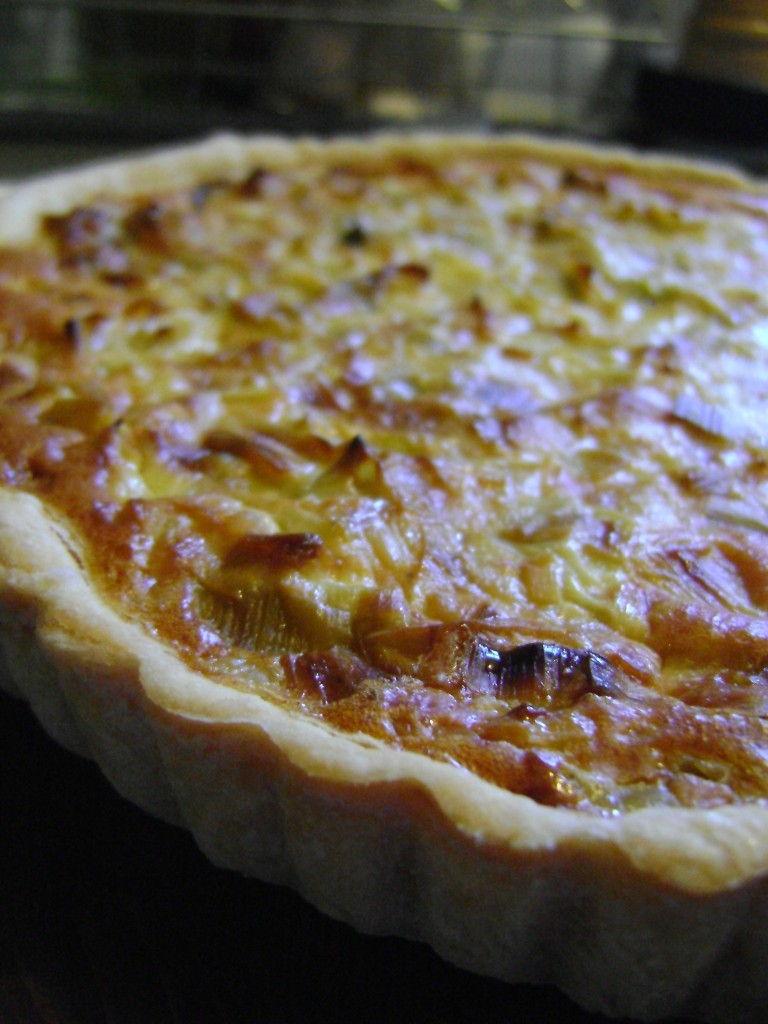 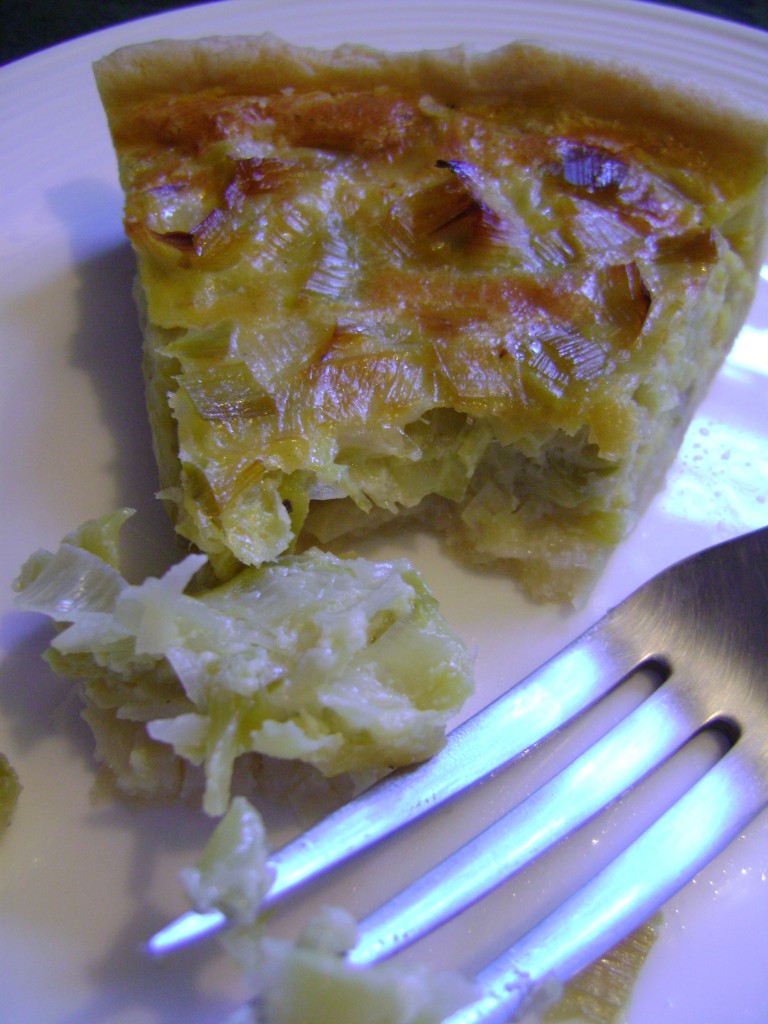 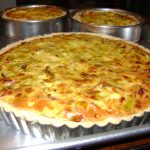 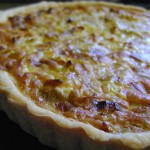 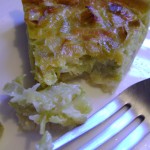 5 thoughts on “Take a Leek… For Example”