Fingerling potatoes, or…what to make when you are craving salt and starch and you don’t want to run all the way to 7-11 for chips and onion dip.

It was rainy last Monday.

Oh, wait.  It’s been rainy pretty much EVERY Monday since God knows when.

I wanted to warm up the house a little so I got some Austrian Crescent fingerling potatoes ready for baking.  Then the idea of baking them in salt smacked me in the face.

Years ago, my girlfriend used to get baby potatoes from us at the market. She raved about baking them in salt.  I’d never heard of such a thing. In fact had forgotten about it until I saw it in the September 2011 issue of Cooks Illustrated magazine.

Since I’d cleaned out my entire kitchen and pantry during the hurricane, I knew I had three (yes, three) boxes of kosher salt.  Why not try this technique, right?  When I told Mom about them, she said these were quite popular at bars ‘way back when’.  Eating these salty little nuggets made one thirstier (because of course, you were in a bar because you were THIRSTY).  Pretty.  Smaht.

I was a bit skeptical but all I can say now is WOW.  I added a thin coating of olive oil to the fingerling potatoes before nestling them in their salt bed and I think that made quite a difference.  I will add many, MANY more garlic cloves the next time I make them because, well, you can never have enough roasted garlic.

I’d like to say these salt-roasted potatoes make a lovely side dish, but Thomas and I just stood at the counter and devoured them pre-dinner.

Pour a 1″-deep layer of kosher salt in a baking dish large enough to hold all of your potatoes (I used a 3-quart Corning, but a 13×9 works well too).  Toss the washed spuds with olive oil to coat, then push them into the salt leaving a bit of space between each.

Nestle some fresh rosemary sprigs among the potatoes then cover completely with more salt.  I used a full 3-pound box.  After you’ve removed the potatoes and stuff later on, and the salt has cooled, you can store this salt in a glass jar to use again for this purpose.

Sneak some garlic cloves in there, too.  You won’t be sorry.  Cover the dish with foil and bake in a preheated 450° oven for about 1 hour.  Test the potatoes to make sure they are done by  piercing with a paring knife.  They’re done when the knife slips in easily.  Remove from oven and let sit for 10-15 minutes.  They’ll stay piping hot in that salt crust.

Gently crack open the salt ‘shell’ and transfer the potatoes to a serving dish.  Brush off most of the large patches of salt, but leave a bit — salty, starchy, oily, that is the point after all!

Artfully arranged, the salt-n-rosemary roasted fingerlings make a nice plated appetizer.  Spread potato halves with the roasted garlic, sprinkle with some of the rosemary-infused salt and dip the whole thing in the pepper-dotted puddle of olive oil before savoring the simple but intense flavors. 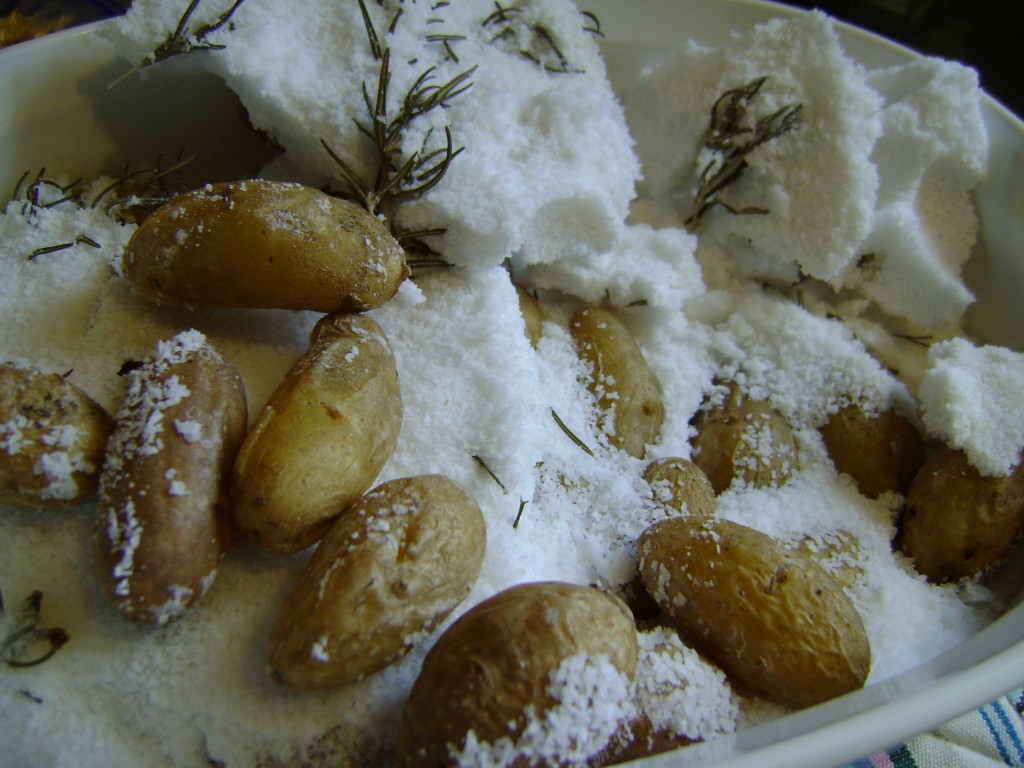 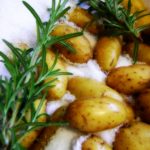 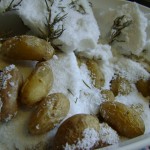