Ready or not, life does indeed go on after a natural disaster.  Heck, for those not affected, life continues unchanged… THEY remain unchanged.

But sometimes an event affects you so deeply that even going about your regular daily chores is an emotional struggle.  I found myself in need of basic essentials following the second flood and when the road was finally cleared and my car didn’t have to don water wings to make it through, I went to Target.  I did a quick browse through Borders as it was their last few days in business (this makes me very sad) and I was hoping to pick up a few bargains. 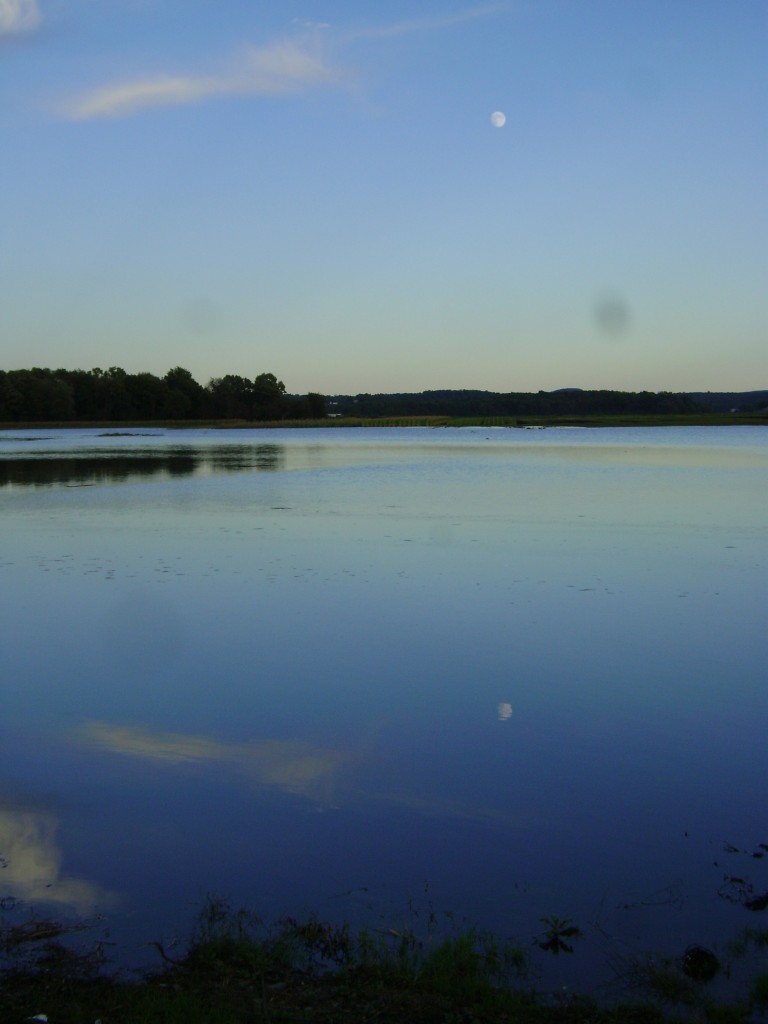 As I walked from Borders to Target within the mall I passed dozens of people.  Some were sitting on benches enjoying a cup of mid-morning Joe.  Others were ranting on cell phones to girlfriends or husbands or whomever would listen, if in fact they were listening, because judging from the crap I heard on my end, I’d tune out immediately.

I found myself wondering what could be so important that you would ignore the people you’re with and have intense, animated conversations with someone over the phone (some on loudspeaker – GET A HEARING AID DAMMIT!  I have no interest in your life.)

Then you had the moms and dads with kids in strollers, brand new walkers, their miniature pants full of Huggies, stumbling about in front of Old Navy.  Little preschoolers were begging for 50¢ to ride the bulldozer or train and their parents obliged, all the while chatting on the phone,  politely smiling but obviously disinterested in their child’s actions.

*slap to the forehead*

Don’t you people realize that life changes in minutes and your child could be gone tomorrow?   Everything you know could wash away or burn up or be ripped from your hands no matter how hard you try to hold on.  There will be no more train rides. No more pictures on Santa’s lap.  Never another First Day of School.

You do the best you can, and then sometimes you just get mad, damn mad!

I was angry that day (not just grumpy or bitchy or snarky… as per usual).  I was angry that my family had to experience this trauma while the rest of the world went on their merry way.

Angie* went to a wedding and got plastered while I was up all night biting my fingernails in terror wondering how on earth the water could STILL be rising and when the hell is it going to crest?  It’s never been this high before… and yet it kept coming.

Dean* had a date with his dreamgirl, and had very nearly gotten to second base when I remembered my market scales were still in the ‘sidecar’ of my market truck (Big Bertha).  So while he was trying to score, and she was saying no freakin’ way, I was wading through knee-deep rushing river water to move $2000 worth of scales to higher ground.

Carly* said she would really have liked to help us bail out but she already had plans to go to a concert.  I, on the other hand, was trying to get my son to a safe place where there was electricity and potable water and no danger of being whisked away following one false step in fast current.

I’m going to Target in search of  safe drinking water and food that we can eat without much more preparation than opening a package and these just-out-of-college twits are choosing cell phone plans.

I felt more than a little disconnected.

I want one day of not hearing pumps and not being wet.

My cousin and I were chatting one afternoon and she said, “I want one day of not hearing pumps and not being wet.”  She was right.  I didn’t have any more sneakers to swap out — they were all wet and nothing was drying.  Even my rain boots (which promptly filled with water because the water was so deep) got moldy inside.

It was almost as if we’d forgotten what life was like on the outside because we’d been isolated on our road for so many days.

I’ve lived on Celery Avenue for just about all of my life.  The Wallkill River runs behind my parents’ house and was a comfort to me at bedtime.  When I moved away from home after college I never slept as well nor as soundly as I did when I was in my little corner bedroom with 2 windows open to the whoosh of whitewater.

But the river floods.  We know that — it has for generations.  Only on rare occasions has it exceeded its banks but sometimes you have extenuating circumstances like hurricanes and such.  We had over 13 inches of rain in just a few days time.  To add that on top of an already wet season, and the implied saturated ground, well that just spelled trouble.

We had no idea how much.

But like I said, life goes on.   One thing is certain, however, and that is we will never be the same.

We still had the First Day of School and the requisite haircut (thankfully Mom does it, so The Boy was all set for second grade).  One major difference?  Our road was still technically closed so the bus wouldn’t come down to pick up the kids. 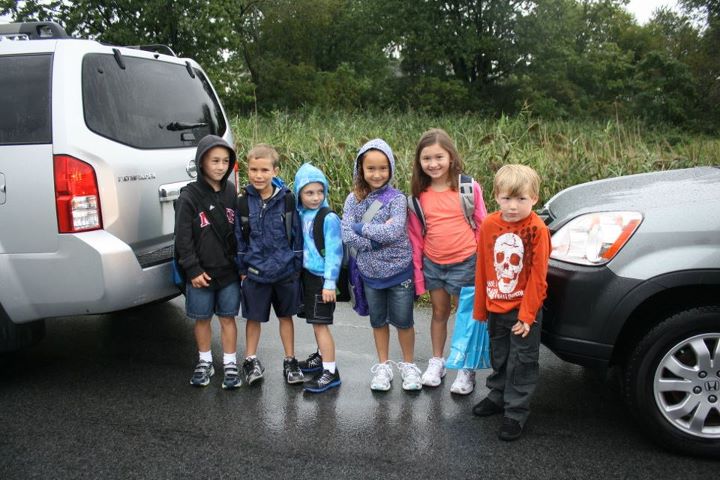 So here we are waiting for the bus in the rain… Thanks to Denise for the picture. 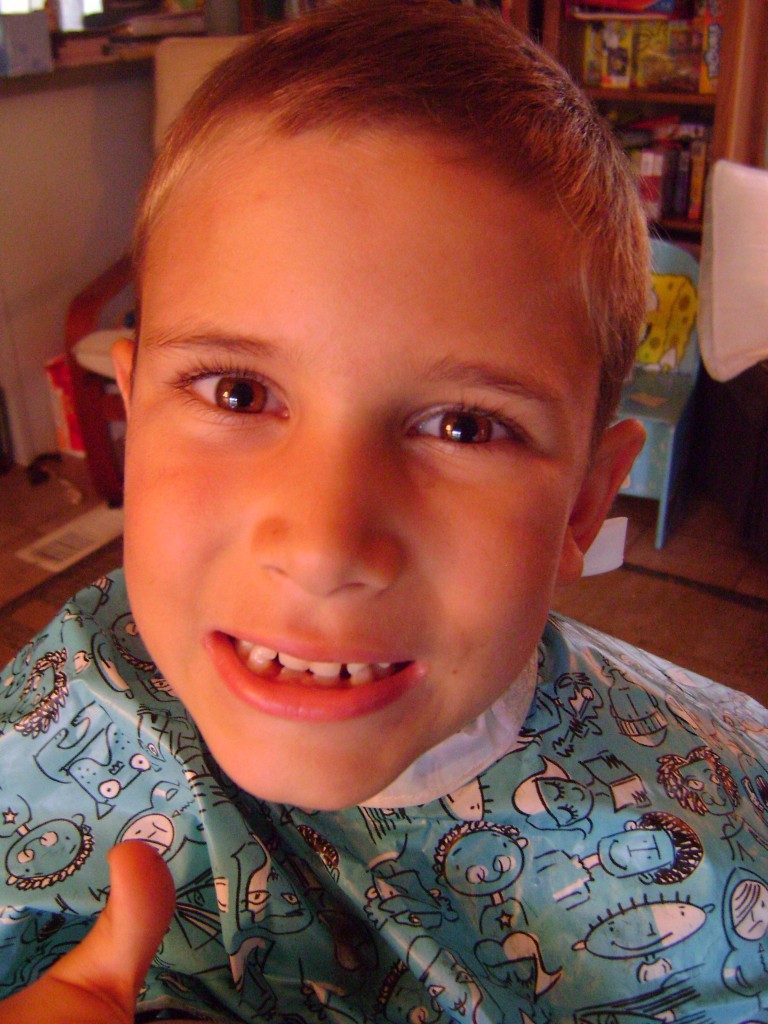 My sweet little nugget of snark… cheesing it up for the camera. 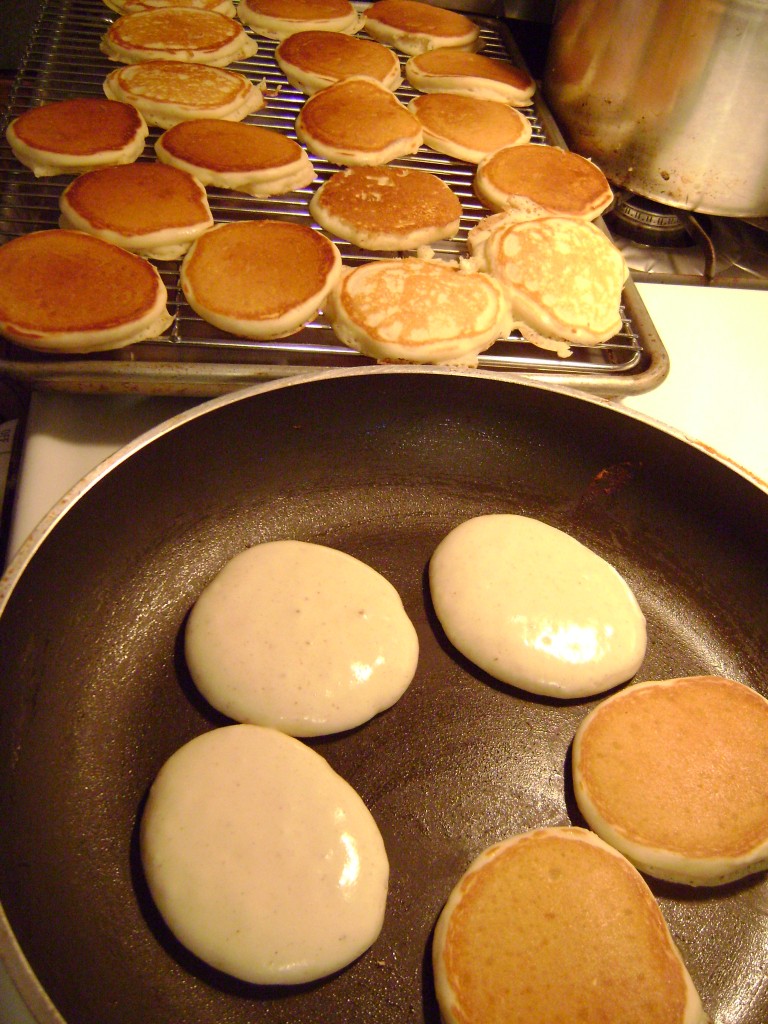 Of course we had to have pancakes for the First Day of School!  Mommy is smart and makes extra for the freezer. 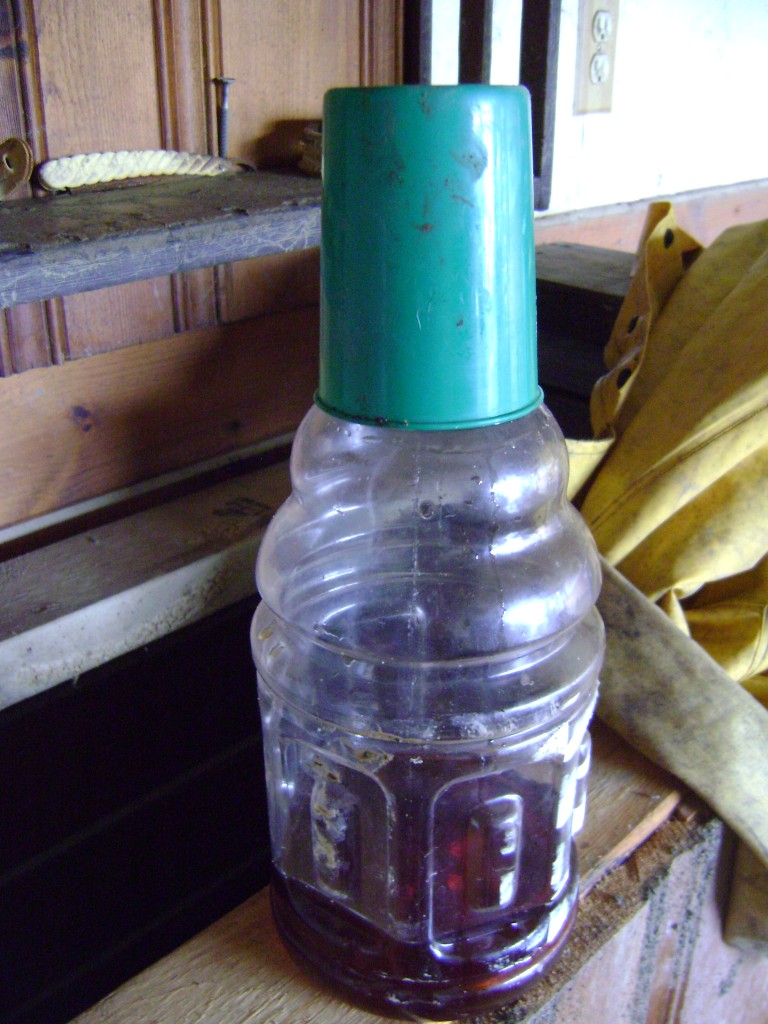 Sonny found a bottle of Mom’s grape wine (1980 vintage) in the basement after it had drained. Yes, he and Glenn drank it. What? Dad strained it through a coffee filter!

Part of my normal is having dinner with my BFF Laura. We’ve known each other since first grade and if I really wanted to embarrass both of us (which I don’t), I’d post pictures of us from junior high school.  YIKES!

Last week Laura made me a wonderful dinner of ‘crab-cake ravioli’ with a Marsala cream sauce and salad. Her aunt’s famous recipe salad dressing was delicious and someday I will make it.  I couldn’t go without bringing something, but I knew a complicated dessert was out of the question. My house is too crazy right now to create multiple-step sweets ‘n’ treats.

So that box of puff pastry that I had in the freezer came in handy! I let it thaw then rolled it out a tiny bit on a floured board. Cutting it into the shapes I wanted and topped with some delightful combinations of fruit, nuts, cheese and spices.  Brushed with an egg wash and baked in a 400° oven until golden, these were simple yet impressive.

You, too, can whip up something to wow your hostess even if you only have an hour. 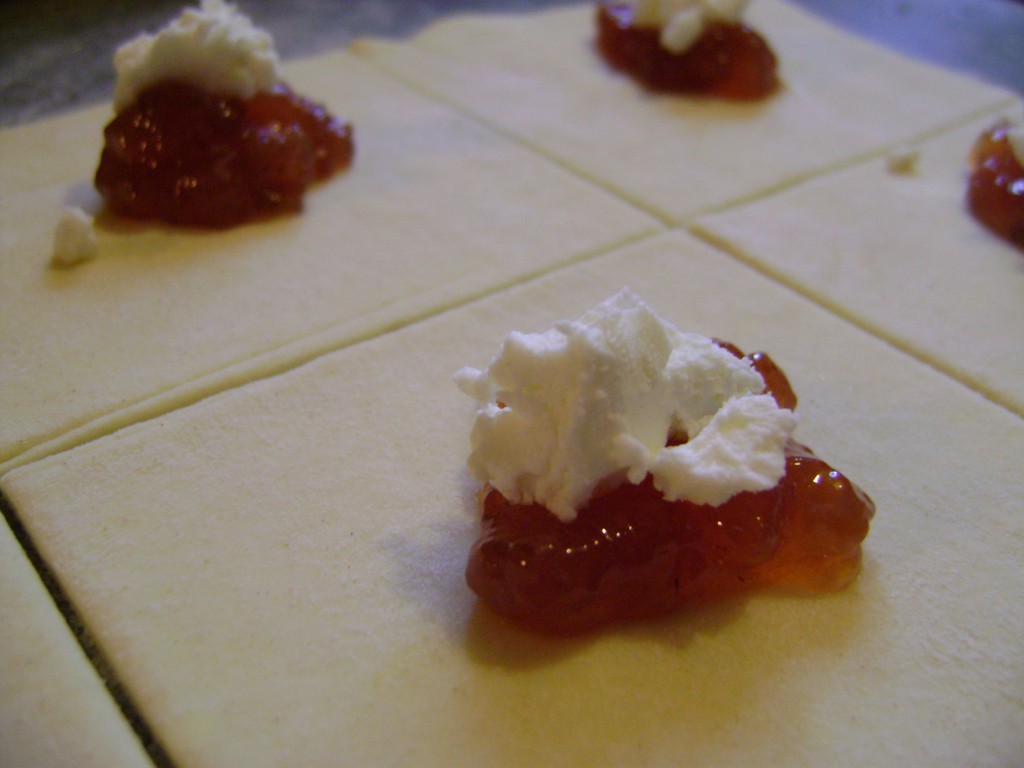 Strawberry jam and goat cheese top these 4″ squares of pastry.  A light brushing of eggwash on two sides before ‘turning over’ the dough and sealing with a fork helps keep the triangles closed. 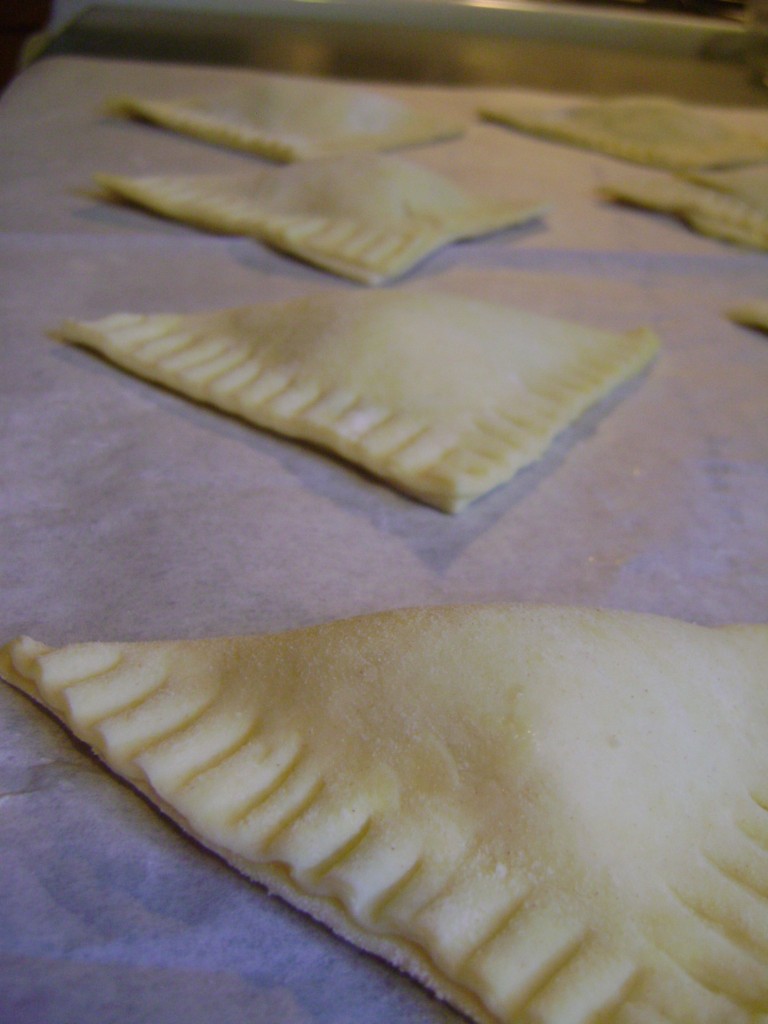 Oh yes, please do use parchment paper or a Silpat baking mat.  Clean-up will be much easier.  You can thank me later. 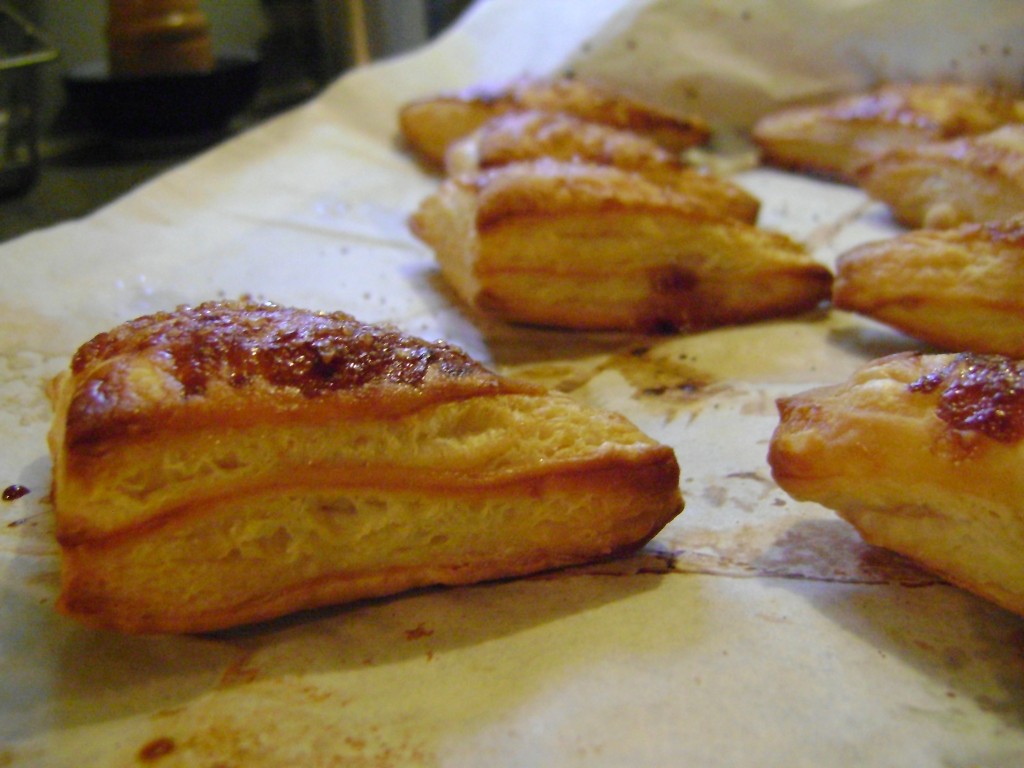 A brushing of eggwash (beaten egg with a bit of cream) and a sprinkling of raw sugar ensure a crispy brown exterior.  I’m not saying it’s OK to grab extra ‘Sugar in the Raw’ from Sbux even if you only need a little bit. 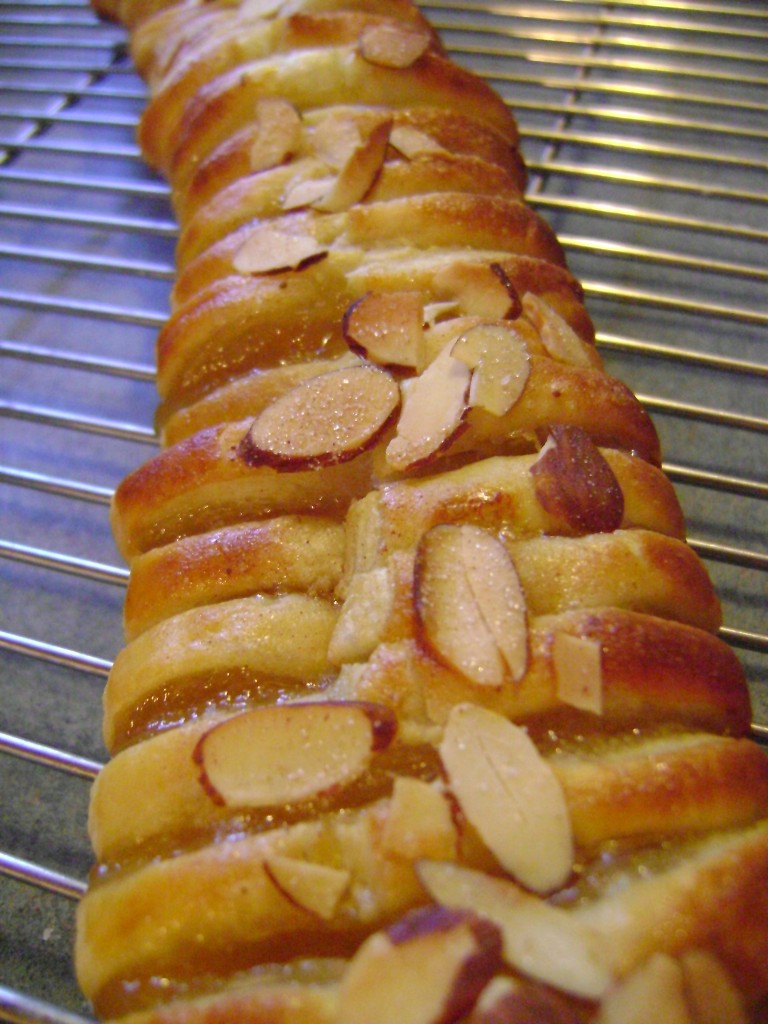 * Please note: the individuals mentioned above are completely fictitious. An example of the crap that goes on when any one of us are in the throes of battle. What’s important to remember,  is that when our lives are going swimmingly, someone else is fighting a demon.  We mustn’t be hasty in judgment. 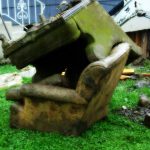