I know.  I’ve been a total Debbie Downer lately and I’m sorry.  Ironically, my snark has been off the charts, but I just don’t feel like recounting much of it.  I’ve been very sentimental.  I guess that comes from seeing so many valued possessions soaked to ruin and/or washed away.  Some things I’m sure we haven’t even realized are missing will likely be remembered at a later date — and we’ll say, “oh.  The floods.”

We did the same thing when our barn burned to the ground in 1998.

You know that whole “when it rains, it pours” thing?  Whoever invented it can suck my left elbow.

We’re done with it.
Had it up to here.
Finito.
Completa.
No MAS.

So instead of going on and on with more flood stuff, I’m sharing a post I was working on BEFORE the flood.  Since we’ll be seeing the last of the peaches very soon, I suggest you get yourself some and make this for breakfast on Sunday.  Gather the family ’round, appreciate them, love them.  Don’t wait for a natural disaster – life changes in a matter of seconds.

Rest assured that the barter system you read about in elementary school history books is alive and well and thriving at farmers markets around the country.

Except this farmer doesn’t come home with wampum.  OR beads or shells or furs.

I get pickles and cheese and raspberries and pesto and bread.

My Saturday bread connection loads me up a few times a month, sometimes with them filling a bag and other times with me choosing. Two weeks ago I ended up with an olive and onion ciabatta, lots of corn muffins and  an eggy, buttery challah braid (Fletch’s choice – so I could make The Boy french toast.  Thank you, Fletch!).

He (The Boy) is such a little picky-pants lately.  I guess most 7-yr-old boys are the same?  Or maybe it’s kids in general.  Just when Mommy figures out and shops for a meal plan that will please her family, that family goes and throws a monkey wrench into things.

“SINCE WHEN?” says Mom, sweating and dirty from a day of farmwork, yet still managing to get a healthy meal in front of her child by 7pm.

“Well, it’s not that I don’t LIKE it really… I just don’t like it leftover.  I think I’m allergic.”

If he wasn’t so damn cute I’d clock him right in the nose with a cherry tomato.  Which he doesn’t like either.

So he’s been a little ‘iffy’ with the french toast of late, but OH WELL, this isn’t the diner, nor do you get to pick one from column A and one from column B.  This is MY HOUSE and you’ll eat what I make or you won’t eat.  Ok, maybe cereal… but you get my point.

I went down that path briefly where I’d prepare different meals for each of us and I was utterly exhausted and never enjoyed a meal.  I worked my tail off for what?  Now, as has been the case for several years, Thomas has the choice of eating what I put in front of him or he can  have a bowl of cereal.

Don’t go crazy now — he rarely eats cereal.  In fact, I often involve him not only in dinner preparations but in dinner planning as well.  He’s pretty darned good at it when he wants to be but it’s important that we start early, even if it’s just putting the idea in his head the night before.

“Tomorrow night we’re gonna have a great dinner that we’ll prepare together!  I think <fill in blank> is ready to pick.  What do you think we can make with that?”  You can practically see the gears turning as he grins and starts creating in his mind.  See how that develops interest?

Sure, that approach means you have to have a well-stocked pantry, but if your child is like mine you don’t need much more than pasta, rice, cheese and eggs.  Add lots of good green things to that (and possibly title your dish ‘Monster Guts’) and you’re good to go.

On a recent Sunday night, I was so wrapped up in laundry and bill paying and my weekly nap on the couch that I hardly realized the time and found myself with a giant “What’s for dinner?” question mark over my head.  I hate that feeling, especially when I’m still groggy (read: grumpy) from dragging myself from my little blue cotton IKEA sofa-nest long before sleep-satisfaction.

Then I spied the bag of magic bread – that humble loaf of flour, egg, butter, honey, yeast that can be transformed into a rich and delicious dinner at a moment’s notice.  As I walked into the kitchen I caught a whiff  of a bowlful of fresh peaches, and then it hit me all at once: Grilled Peaches with Challah French Toast!

I’ve never grilled peaches before but I’ve always wanted to.  Look for ‘freestone’ peaches instead of ‘cling’.  Cling peaches’ flesh adheres tightly to the pit, freestone have a loose pit and are much easier to separate.  It  was easy enough to grill these beauties on my cast iron grill pan indoors.  Once I heated up the pan for about 10 minutes, I brushed a bit of canola oil on the peaches and grilled the halves on both sides until barely soft.  The majority of the peach is still firm, and not even hot.  That’s fine… much more cooking and they will disintegrate into a heap of mush.

I used my general french toast ‘recipe’ which I can pretty much make in my sleep (and often do).    Simply beat together several eggs and some milk (about half the amount of egg by volume — if you measure.  Which I don’t.), add vanilla and a bit of cinnamon and start dipping your bread slices into it, flipping each slice to coat.  I like to line up all the soaked bread slices on a cookie sheet (rimmed is a good idea) while I continue dipping their brethren.   Giving them time to soak helps your bread absorb all the custard and become completely saturated.  If you don’t do this, you may find that you have a core of plain ol’ bread when you cut into your first piece of french toast.

Fry these bad boys up until golden on each side in a non-stick pan barely bathed with canola oil and keep warm in a large lidded casserole or on a cookie sheet in low oven.  Serve with maple syrup or your topping of choice… such as grilled peaches and this marvelous maple-cinnamon cream.

Stir all these lovely things together and drizzle on french toast, grilled fruit, pancakes, etc. 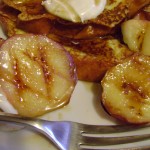 4 thoughts on “Brief Respite and Breakfast for Dinner”