And not in the good “I could make a gajillion dollars off a reality show” way, either.

You see, when the first flood hit (I cannot believe I’m writing it like that — but there were indeed TWO FLOODS within a two-week span), my parents’ home suffered some damage that made it impossible for them to live there.  Kay brought over a motorhome and Mom and the dog (Mikey) have been living in it.

But after 40 years of marriage, Mom and Dad no longer share a bedroom, one reason being they both snore and keep each other up.  Plus, the dog has taken dad’s place and prefers a waterbed to the floor.  Smart dog.  I honestly believe more  marriages would be salvaged/saved if we had separate bedrooms from the beginning.  So Dad has taken up residence in Thomas’ room, complete with TV and a shelf for an assortment of clothing.

Dad’s got his own cup in our bathroom, his Listerine and toothbrush are perched on the counter.  He brought his ‘special spoon’ from home (they can still go IN the house, but the power’s been cut and after this weekend, there was still 7 feet of water in the basement), and has a place for his dirty work clothes right on the floor.  Trust me, you have no IDEA just how dirty these clothes are… the floor is the best place for them.

Dad’s cranberry juice is in my fridge, his strawberry ice cream is in the freezer and he even has his own chair in my living room.  He’s here with me for 3 meals-a-day.  He makes his own breakfast (yes, his favorite cereals are in my kitchen cabinets), but for the most part he comes in at lunchtime, sits down at the table (after washing his hands THANKGOD) and asks, “so what’s for lunch?”  He does the same thing around dinnertime, but that’s a bit later since he works until dark and beyond.

We’ve had so many wonderful people bringing us food that I haven’t really had to prepare anything, which is good because my culinary psyche is pretty much in the toilet these days.  It’s hard to be inspired when all you see is mud and rotting vegetables.

It’s not so bad.  Thomas, even at 7, likes to sleep with Mommy in the big squishy bed, so he’s loving this arrangement.  But he’s also getting a little antsy about being in his own bed.  Soon enough, my son… soon enough.  Enjoy the breakfast banter and dinnertime giggles.  Those are the memories you want to savor — not the ones where you’re trudging thru knee-deep water in too-short boots.

Thomas is an animated and intelligent little man, and he loves a good conversation, regardless of topic.  Since my father loves to talk (read: rarely stops), they make a perfect pair.  Every night ends with the two of them sitting on the couch under a blanket, giggling and making jokes or discussing some mechanical project or scientific theory.

Lots of discussion about light years and millions of miles from the sun; explanation of term diameter (“we can measure the circumference of your head to find diameter”); arguing about source of sun and the gases that compose it; debating millions vs billions in decimal terms.

Dad: I agree with you.  It’s always been a planet as far as I’m concerned.  I like Saturn and it’s rings, but I like Uranus too.

Dad grins; Thomas grins; ridiculous laughter ensues and they act like 12-yr-old boys who just saw boobies… or talked about butts.  I’m glad my father has so much to teach my son, but seriously?  The whole (hole?) thing could’ve waited a few years.  *sigh*

Next thing I hear is Thomas saying, “Papa?  Papa?”  I turn to see my father sound asleep on the couch right next to his grandson.  He wakes, startled (possibly a result of the flash of my camera LOL), then in just a moment of coherence asks, “are you gonna post that on Facebook?”

So up he is, and as he dresses back in his wet shorts and sneakers (because of these damn floods we’ve been in a 2-week long continual state of wet.  And why, yes!  It does suck.) he kisses the boy goodnight, tells him, “don’t let the bedbugs bite” and he’s out to check water pumps.  A farmer’s job, like a father’s job, never ends.  And lucky for me, I’m here to observe a grandfather’s job well-done, too. 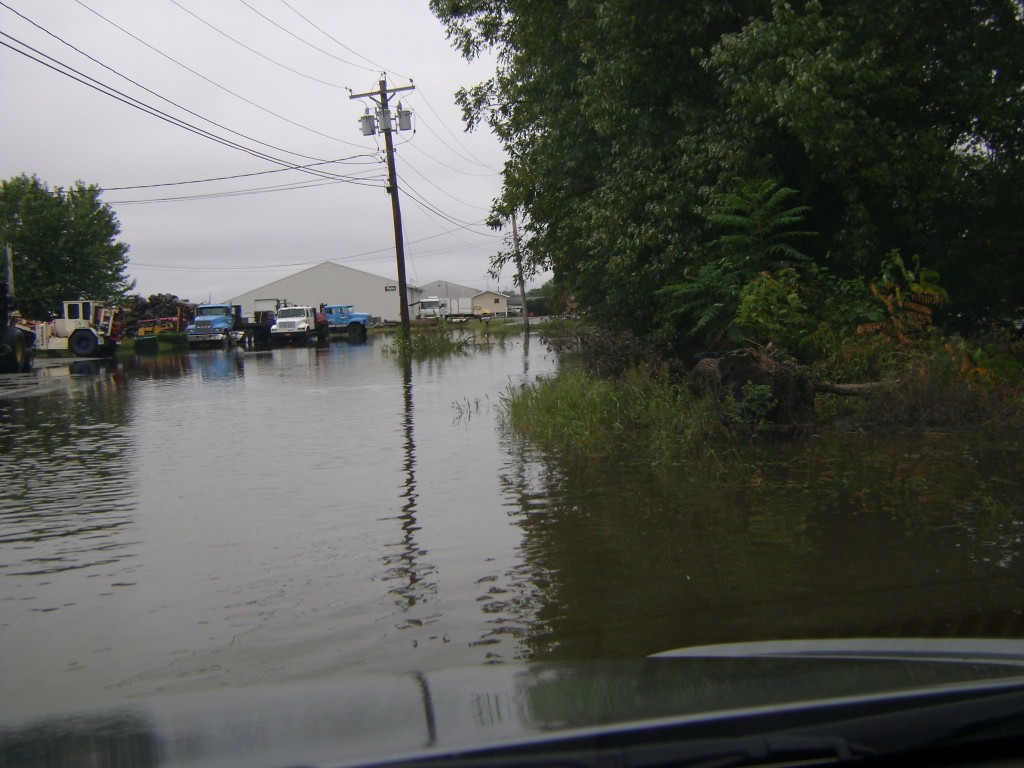 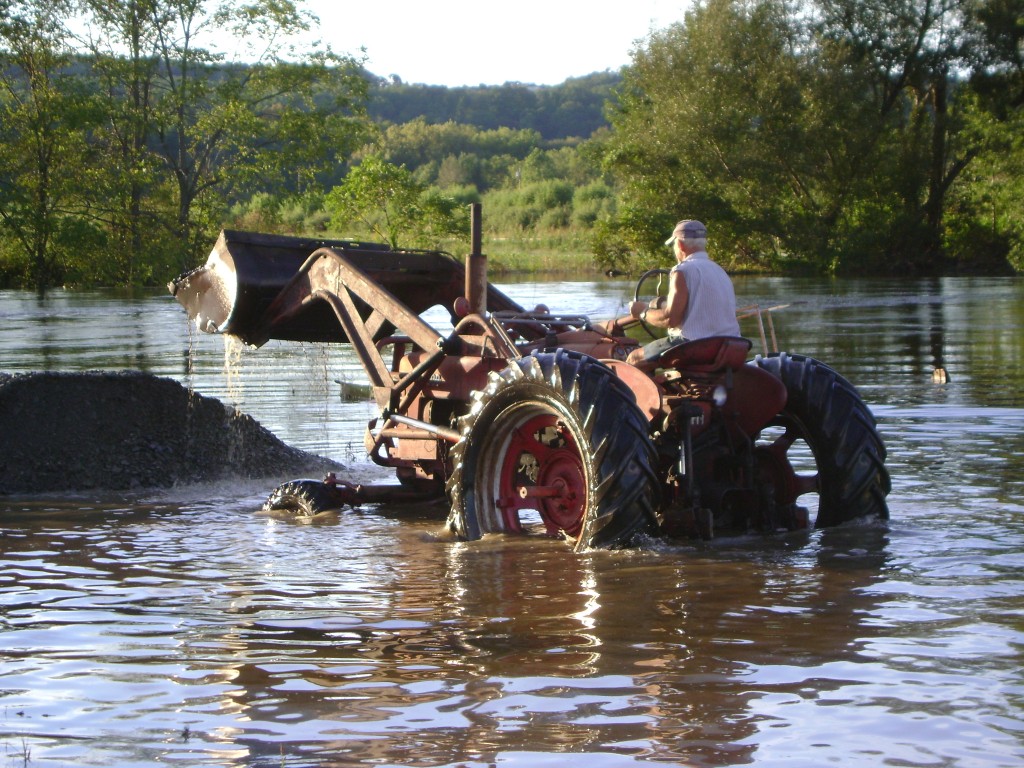 Only one way out of our road once the real road is flooded — that’s a one-lane gravel road through Black Dirt fields.  It started washing out with Irene, and by Friday night it was getting worse.  Dad dumped a few loads of rock and gravel on it just in case we could get out for market on Saturday.  We couldn’t.  By morning the water was rushing like mad over this road, too. 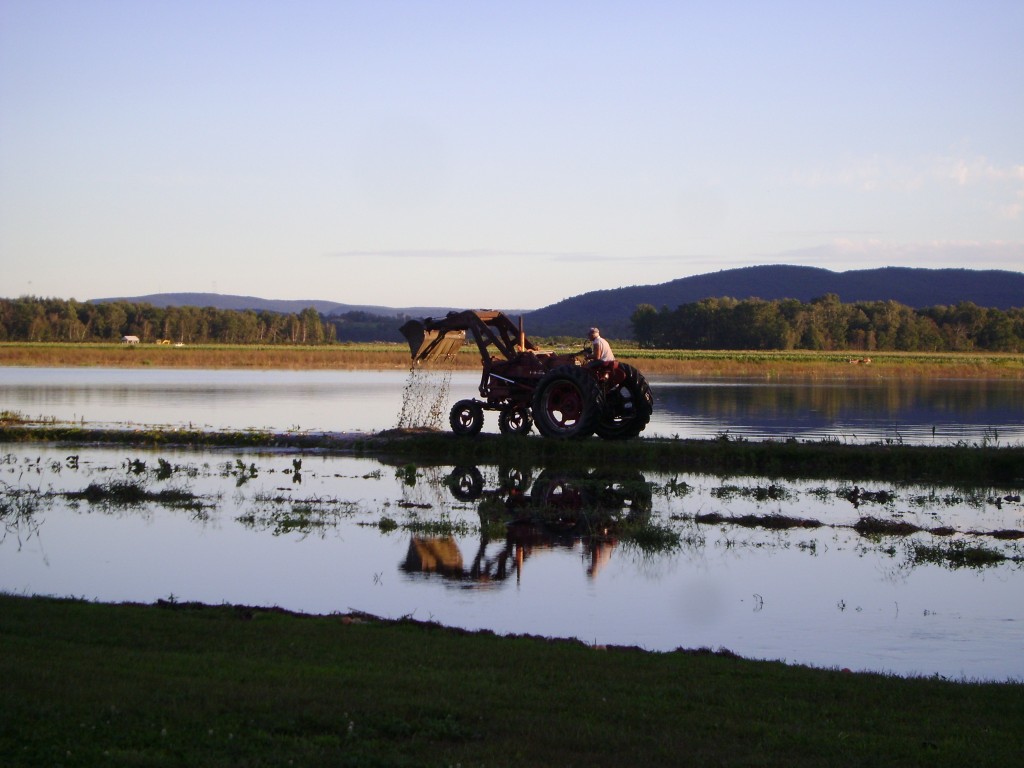 He dumped load after load while the kids looked on and smiled, all the while Thomas is cheering, “PAPA! PAPA!”  Like he’s Superman or A-Rod or something… Everybody needs a hero, right?

So here’s the deal: Thomas doesn’t eat meat.  Dad does.  Dad insists that animal flesh keeps you healthy and makes you STRONG!  As he finished his beef stew (another gift), Dad told Thomas he could FEEL his muscles getting stronger.  “You can’t hold my arm down because my muscles are getting bigger!”

The gauntlet was thrown, the challenge issued… 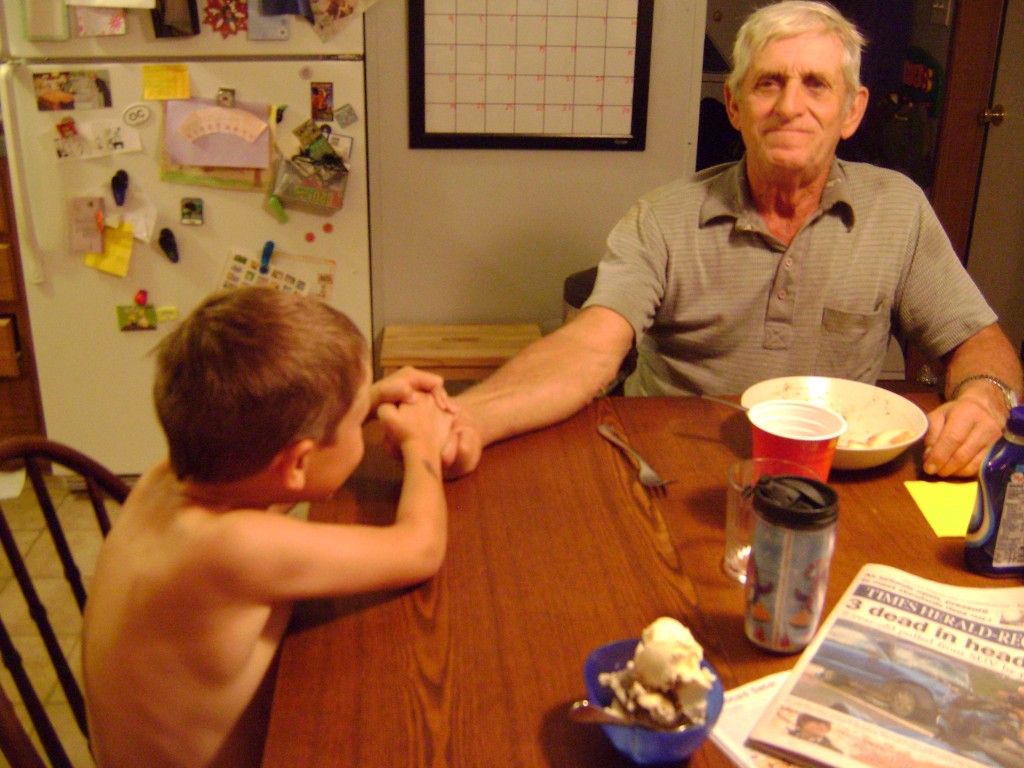 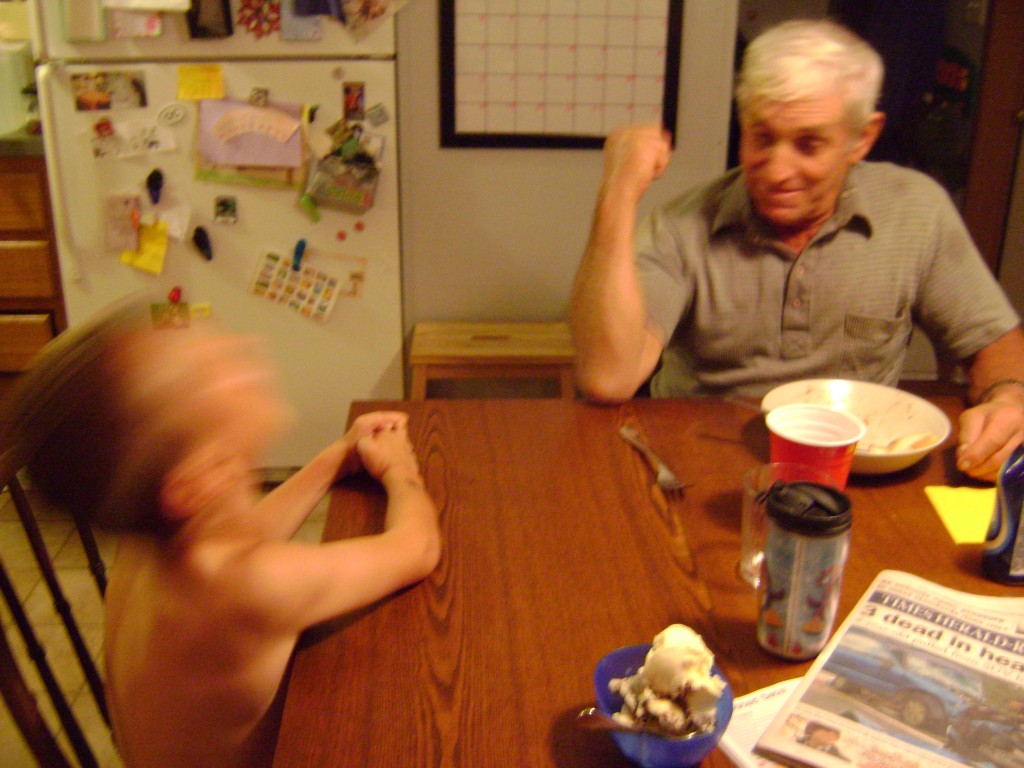 And dinnertime ends in contagious laughter yet again.

6 thoughts on “I Married My Father”