Ok, so my dad doesn’t look like Jim Morrison… OR Val Kilmer…  But he IS handy with doors, as he fixed mine only a few short months ago.  The fact that in a previous life The Doors provided good make-out music probably should have led me to a different title, but eh.  I’ve never been known for being PC.

And since I’ve got this horrific earworm now, so should you!  <insert evil cackle here>

He got me the ignitor I needed for my oven and now I can go back to creating fall-time baked dishes.  THANK.  GOD.  Because of course, since it’s been broken, I’ve been DYING to make things in the oven.  Perfect example of supply-demand?  Guess I really DID understand the principles of economics despite the D I ‘earned’.  Skipping class in favor of an OCCC-McMuffin and never buying the text books probably didn’t help either.

With Thanksgiving coming up, we’re selling a boatload of Brussels Sprouts at the markets.  As I keep telling everyone, but probably shouldn’t, I hate them.  I hate how the sprouts fall off the stems and get “lost” inside the truck and are only found after they emit a foul odor.  I overdosed on them many years ago (after a long boycott because I grew up on frozen sprouts) and haven’t eaten them in probably 10 years.  I just couldn’t bring myself to do it.  We grow so many other interesting things – why waste time on these icky little cabbages on prehistoric-looking stalks.

But this year has been absolutely great for our sprouts.  We lost quite a bit to a mildew problem, but the sections that are left are amazing, as you can see in the pictures I’ve posted before.  They really are a beautiful looking ‘creature’, especially en masse amidst the other colors of fall and against the dark backdrop of Black Dirt.

I WANT to like them.   I really do!  But I’m so swayed by the memory of  those horrible microwaved, previously-frozen brussels sprouts from my childhood!  I keep asking customers, over and over again, “tell me how to make these so I’ll like them.”  The one method most people come up with is roasting.

Even the head of one of the Farmer’s Market Committees said he’s a convert, which made me very happy.  As he’s said before, if he doesn’t know how to cook something, he asks me…. and I’ll always have a solution that makes him like the item in question.  Surprisingly (referring to him liking the veg, not that I know how to cook things.  Duh).

So I got up my courage and dug around in our cold-storage.  I found a leftover stalk of sprouts that had been floating around for nearly two weeks (*let this be a lesson: sprouts last a LONG time in the fridge, and these weren’t even cared for properly.  Proper care means removing sprouts from stalk – just pop them off – and store in a plastic bag or container in fridge.).

It was a chilly, nasty night, and after a long day of washing potatoes and squash all I could think about was warming the house up.  So roasting it was!  But then what?  I roast everything, as much for the ease of preparation as for the flavor that dry cooking imparts as it caramelizes the vegetables, encouraging them to soak up every last bit of olive oil, salt and pepper.

Then I remembered Marie and Lillian.  These two lovely ladies have been our customers in Pleasantville pretty much since we started that market in 2004.  The last time they shopped they bought half a dozen stalks.  Marie said they don’t roast them.  Rather, they saute them in bacon fat just like someone else I know….  No wonder Dad loves this mother-daughter team!  They’re kindred spirits in the kitchen!  The difference?  They stir in a big spoonful of horseradish for kick.

That was the springboard for the sauce I put on my roasted sprouts.  I think Dad smelled them, because within 10 minutes of me turning off my oven, he was sitting on a stool in the doorway (he doesn’t want to endure the hassle of taking off his muddy boots, so he graciously sits there as I stuff his face with my creations).  The sprouts WERE hot at one point, but they weren’t when we ate them.  The creamy, slightly-spicy sauce was absolutely delicious, and a wonderful complement to the almost-sweet caramelized sprouts and shallots.

I love things that don’t need to be served piping hot, especially at holiday meals, because when you’re feasting on so many dishes, it’s just impossible to keep everything at the perfect temperature.  My Cider-Glazed Cippoline are the same way.  You can bet both of these will be on my Thanksgiving table this year.

Brussels Sprouts – fresh, off the stalk, as many as you want!
Shallots – sliced about 1/4-inch thick
Garlic, chopped
Olive Oil, Salt and Pepper (the gold standard of roasting!)

Preheat oven to 400°.  If the sprouts are different sizes, cut some in half so they are approximately the same as the others.  Toss sprouts and shallots with oil, s & p and spread on a rimmed baking sheet.  Roast for about 20 minutes, stirring once, then add the garlic.  Roast for another 10-15 minutes or until as tender as you like and deliciously golden brown.

Stir all ingredients together until smooth and refrigerate until serving.

*** I used about 1/4 t grated fresh garlic (I love my Microplane grater for this purpose).  It was delicious, but wasn’t appreciated at storytime.  No story was apparently interesting enough for The Boy to endure his mother’s garlic breath, even with gum.  So word to the wise, skip it or use powder if you aren’t in LOVE with garlic.

Sunday November 21st from 10am until 3pm
Join us at The Farm for our 5th Annual Thanksgiving Open House
Details at www.bialasfarms.com 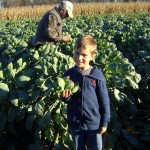