Home-fries with Poblanos and Bacon and Eggs

Because breakfast is important, especially during harvest. We spice it up a bit with Poblanos

Fletch and I took a ride around the farm several weeks ago.  Not only was it a fabulous photo day, it was also a day of memories, and memories are made for sharing.

What’s the point of keeping them all bottled up inside of you when those memories can bring joy to others?  Those memories can help others to understand you better and can even draw you closer together.

When I finally hear the harvester engine start up in August (or this year, September) I know that it’s onion harvesting time.  That sound and the events that follow haven’t changed since 1972.  In fact, Thomas and I were just watching some home movies from the early 1970’s. We saw the harvester being pulled by a bulldozer (which we still have).  My father was driving and he had my brother and me on his lap.

Nothing has changed, essentially, except the tractor pulling the machine (purchased around 1975) and the passenger (born in 2004).

Oh, and my father’s hair isn’t quite as dark.

An acre covers a square just over 200 feet by 200 feet so you can imagine that 50 acres of anything really adds up in terms of sheer enormity and workload.  Compared to farms out west, I suppose that’s nothing.  But I was lucky enough to weed acre upon acre of onion fields way back when I was a young girl.  I know up close and personal just how big 50 acres can be.

“We all had to work back then, kids and adults alike”

After 1972, Bialas Farms switched from growing celery to growing onions, a trend that was growing in Orange County.  I was 2 years old so I cannot comment on how lucrative that turnover was, but I do know I had the best flannel-lined corduroy pants that one could buy at Playtogs.

I do, however, remember with great fondness the celebration and overall jubilant spirit that surrounded the end of harvesting.  When the last round was completed (one round was up and down the field, making a complete circle), the whole family, even barefoot kids on bikes or in bathing suits, would race to The Shop and hand out the paper cups. We would toast the occasion with whatever happened to be on hand – in those days it was grape Malt Duck.

We all had to work back then, kids and adults alike.  There was a stretch of time where we four kids (cousins, 2 sets of siblings living next door to each other) would go out to work 6  or 7 hours a day picking weeds.  We got our pay envelope at the end of the week, or the end of the summer, and we would use that to buy school clothes for the coming year.  At harvest time, our job was to pick up any onions that had fallen from the big pallet boxes when they came off the machine.  We made it a game – a race to see who could run to the next  box and snag all the onions that fell in its shadow.

That feeling came back when I saw Dad pulling the harvester out of the field to be cleaned and put back into the barn for next year.  He drove past me with a huge grin on his dusty face, two thumbs up in the air.  I waved, grinned back, and got a warm feeling in the pit of my stomach – a feeling of relief that the onions were finally out of the ground.

Thomas asked me, as only a nine-year-old can, why it was such a big deal and I explained that until the crop was safely out of the fields and hauled off to the barn, there was always the chance that weather would ruin whatever was out there and we’d be left with nothing to show for 7 months’ work.  Sometimes even when the crop is safely tucked away in the barn you can have a devastating fire that destroys not only the crop but the entire barn and all its contents.

But that’s a story for another time.

Now is a time for celebration because the onions are out of the ground and the boxes have been hauled off the field 6 at a time on the bed of an old 1960s army truck.  So please, if you’re so inclined, raise a glass and help us toast the end of harvesting and the crop we were blessed to bring  home with Mother Nature’s help.

There are some veggies we grow that I don’t eat.

I won’t touch a rutabaga.  Tastes like spicy cabbage – and I love cabbage, mind you – but to me, rutabagas taste like cabbage after it’s been eaten, if you get my drift.  *Shudder*

I even have trouble with Brussels sprouts.  We just started selling sprouts on the stalk at markets this week and when I hear people squeal with delight and say, “Oh I just HAVE TO HAVE my sprouts!” I think they’re insane.

But that’s the way I feel about my poblano chiles!

What does Amy do with poblanos?

I wouldn’t be so gung ho looney bird over poblanos if it wasn’t for Ms. Amy Roth.  She appeared at my stand in Ringwood in 2012 with a cloth bag full of poblanos.  “I’m so glad you still have these!  They’re my new favorite thing.”

You know that caught my attention.  What does Amy do with poblanos?  She makes rajas con crema.  I had to try this and pronto, so that weekend I did.  This spicy, creamy, salty full-of-flavor mix was piled lightly onto grilled corn tortillas and promptly and completely devoured alongside a spicy hot pepper-infused paloma.

Poblano chiles are like a green bell pepper but with a depth of flavor unlike other capsicums.  They have a bit of heat, sometimes more than a bit, sometimes less… it all depends on weather and growing conditions.  When the plants are under stress, they do what they can to deter pests from devouring their fruit and ending its life cycle.  A killer-hot pepper is quite a deterrent!

If you can imagine, we see a lot of veggies around here every day.  Some veggies?  I can take ’em or leave ’em.  Others, like our Polish Plum tomatoes  or these poblano peppers, deserve reverence and I will give up most everything else in my life for an afternoon just to make sure I have these babies on hand for winter cooking.

It all starts with charring.

You can do as I do and char each pepper  until blackened over the gas burners of my stove – be sure to open the windows and turn on the exhaust fan.  You can also line them all up on a sheet pan and broil them, turning frequently, until charred all over.  You could certainly grill them outside if you like.

Once the peppers are blackened, place them in a container with a lid or a bowl covered with plastic wrap and let them steam until they are cool enough to handle.  Take one out and wipe off the charred skin with a paper towel or your fingers.  It comes off very easily.

Slice around the stem end with a knife and remove the seeds, including any of the white pithy stuff that you can.  That’s where much of the heat is, by the way, so if you want to fool someone into tasting a hot chile pepper, eat the flesh and let them bite into it, white pith and all.  It works every time.

At this point, you can simply stack up a few roasted poblanos, place them in freezer bags and freeze for winter.  I say a stack a few because I typically use 3-5 every time I cook with them.  You should package them however you think you will use them in the future.  When you are ready for them, simply thaw them in the fridge, slice or dice and eat!  They are fabulous. 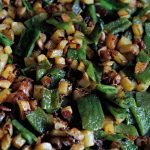 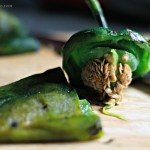 5 thoughts on “Field to Feast: Sunday Morning Homefries with Poblanos and Bacon… plus, A Toast”