The calendar turns to June and people’s tongues start hanging for a real, vine-ripened, homegrown tomatoes.  Anyone who has lived in the Northeast for more than a few growing seasons KNOWS that you will NOT find a local tomato in June, but we can hope… and crave… and dream a little.

We farmers aren’t immune to the siren song of the Love Apple either.   Why ‘love apple’, you ask?  It is, according to Food Lover’s Companion, “a tomato moniker that originated in the 16th century when tomatoes from North Africa were known in Italy as pomo dei Mori, “apples of the Moors.” That was transliterated to the French pomme d’amour . . . “love apple.””  Tomatoes were also reputedly aphrodisiacs, and the French translation of pomme d’amour seemed to fit for that reason as well!

At this time of year, every trip around the farm is an opportunity to sneak a peek at edible goodness.  The passenger(s) are always scoping out the perfect tomato and will silently memorize it’s location without giving a hint to anyone else. Checking it daily until… that one day, that perfect moment, when it is spotted in all its golden or deep red glory.  That moment is usually just before lunchtime, and at times, I think I’ve actually begun to salivate in anticipation.  I cannot tell a lie.  Around tomato time I’ve been known to keep those little paper salt packets in my pocket. Just to have on hand in case the perfect one falls into my lap.

A seed saleswoman we’ve dealt with for years (sorry, Carol) was telling me that there are specific tomatoes designed for early season greenhouse production. They are becoming increasingly popular in our area (henceforth known as “The Valley”).  The seeds are at least triple the price of regular tomato seeds. When you consider the cost of heating a greenhouse (ours are heated with either propane or coal), those tomatoes better fetch a hefty price or it just isn’t worth it to grow them. There is nothing wrong with farmers capitalizing on the consumers’ desire for “local” tomatoes at any time of season.  We’d much prefer it if you bought them from us rather than Chile (no offense to our neighbors down in South America, but…).

We currently grow only cherry tomatoes in our greenhouses, but who knows?   If it works out, we may just try some heirlooms in there next year.  I’ll admit it; I was watching those plants like a hawk, just waiting for the tiny green globes to turn yellow or red.  We had about 2 dozen low-acid yellow tomatoes around the first of June, and before long I had eaten most of them – leaving only a few for Dad.  Thankfully I didn’t have to share any with The Boy since “I HATE tomatoes.  They’re YUCKY!”  He’s half Italian, too, so that in itself is practically blasphemous.

As for field-grown tomatoes, they’re on their way.  This hot, dry weather is great for them and up until last weekend they were thriving.  We had about 2-inches of rain on Saturday and any tomatoes that were borderline blew up with all the water and split their skins.  The sour, fermenting smell of tomatoes rotting in the hot sun is nauseating to me, partly because I know we lost several boxes (and in turn, several dollars) of tomatoes that could have been sold, and in turn, enjoyed by many.

“The Polish Plum tomato is very meaty and grows to be about the size of a woman’s fist.”

Before the rain, though, we were able to harvest about 5 pounds of both hybrid and heirloom red tomatoes.  Dad said, “Oh!  I’ll have to take a couple of bad ones to make a salad.”  “Dad.  [huff] You’ve been farming for 51 years.  Don’t you think you have earned the right to eat a few GOOD tomatoes?”

He said that’s just the way he thinks.  And I don’t think that’s so bad… afterall, the shoemaker’s kids are always running around barefoot, right?  It took some effort, but in the end, I convinced him to take a few home.

As our regular tomato aficionados know, Bialas Farms is famous for the Polish Plum.  This tomato is very meaty and grows to be about the size of a woman’s fist. The skins peel easily and they make such a thick sauce that it’s often necessary to add water!  They make the best oven-dried tomatoes, too.  The seed for these had been brought from Poland well over half a century ago, and each year we save the best fruit so we can harvest and store the seeds for next year’s crop.

Well, I must confess.  I had the first ones of the season this past Saturday.  My friend fondly remembers “the best bruschetta I ever ate” – one that I prepared many moons ago, and has yet to be replicated in his eyes (unless he’s pulling my leg, but compliments aren’t typically doled out with abandon, so I’m sticking with my intuition on this one…).  I decided to share those beauties and whip up a quick lunch.

“We made brochette with a gorgeous loaf of artisan pizza bread.”

Since it was after market, I was in no condition to do a ton of dicing and mincing and grilling.  Previous incarnations of the beast included grilled bread, diced tomato (peeled and seeded, of course), minced garlic, fine chiffonade of basil, teeny-tiny fresh mozzarella cubes, extra-virgin olive oil… But that wasn’t happening on this day.

Instead, it was a quickie (heh heh) and boy, was it delicious! We made brochette with a gorgeous loaf of artisan pizza bread (thank you again, Janet!), simply toasted instead of grilled.  The crusty bread slices were rubbed with a fresh clove of Bialas’ own “German White” hard neck garlic (also believed to be an aphrodisiac, both historically AND for its ability to improve blood circulation wink, wink).

Believe it or not, this technique imparts great flavor without leaving behind the sometimes-annoying bits of garlic.  Topping the bread with a sprinkling of kosher salt and freshly ground pepper and drizzling with olive oil made the perfect bed for those Polish Plum tomato slices.  A generous dose of sliced fresh basil and our masterpiece was complete.

We ate (read: inhaled) the ENTIRE LOAF of bread with tomatoes and garlic in record time, moaning and sighing and wiggling in our seats because of the heavenly tastes and aromas.   That may sound sexy, but in actuality, we were so offensive that we each brushed our teeth 4 times between 3 and 930pm.

In this case, the garlic was NOT an aphrodisiac.  It was downright repulsive.

But would we do it again?  In a heartbeat.  ‘Cause it was THAT GOOD. 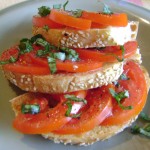 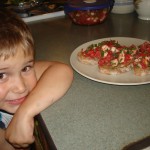 One thought on “Afternoon Delight… Or Love Apples, the Stinking Rose, and… Crest?”