Or at least it will if you’re 6 years old and you’re hot and tired and hungry and your mean, nasty mother didn’t consult you regarding the dinner menu. 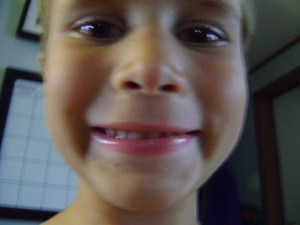 *Author’s Note:   This masterpiece is titled ‘Self-portrait of a Winge Bag’ or —  ‘Before the Fall’.

Here I am thinking I’ll make something really cool and colorful (for the kid) and quick and easy (for the mom) for dinner….  It WAS all of those things, and more importantly, it was damn delicious!  But this wonderful dinner was marred by the sobbing and sniffling coming from the living room sofa.

Out of the corner of my eye I saw pillows being hurled across the floor, then he buried himself, dripping nose and all, behind the couch cushions, all the while mumbling, “YOU NEVER ASKED ME WHAT I WANTED YOU TO MAKE FOR DINNER!”

I must’ve missed that memo.

Since I’m the chief cook and bottle washer, I am the one who makes up the menu.  If we’re going to have pasta, though, I allow Thomas the chance to choose which shape we have.  Kids, especially little ones, like to make a contribution and they like to have control over something…. ANYTHING!

So I give The Boy control over this one part of dinner.  I always find that he is more apt to eat different things if he has been involved in production somehow – whether it was picking the veggies or rolling some dough or stirring the soup.I try to find interesting shapes of pasta.  I grew up on elbows and vermicelli and that was it.  (No offense, Mom.)

It got boring – and that may be part of the reason why I search for new things now.  Plus, I appreciate how things look on the plate.  So this dish was made with mafaldine – about twice the width of fettucine with ruffly edges.  I also added two staple veggies, and ones I know The Boy eats, carrots and zucchini.  To make things quick and interesting, I used my vegetable peeler (Kuhn Rikon Y-style peeler) to cut thin ribbons all the way thru the veggies!

The carrots (2 med-lg) go into a large saute pan first, with a thin layer of water covering the pan.  I sprinkle with a bit of salt, then put a lid on it for a few minutes to let the veg steam.  After 3 or 4 minutes, I add the zucchini (2 small – they have less seeds!) ribbons.  By this point, most of the water has evaporated, and I’ll also add olive oil, minced garlic and pepper.  It only takes a few minutes – maybe 5-7 – to get the veggies tender and just cooked.

I then add about 1/2 cup heavy cream and let it simmer away to thicken.  Two to three minutes later I add a generous 1/4 cup grated parmesan or pecorino romano cheese and stir in 1/2-pound of cooked mafaldine (anything will work, but something like fettucine is best).

If it’s too thick, I add some of the pasta cooking water and continue heating for just a minute more to incorporate the cheese and thicken the sauce.  Lastly, I add a bit of chopped fresh tarragon.  Basil would be a tasty substitute.

This will serve 2-3 people, excluding fussy children, so don’t worry about the cream so much.  Add a grilled chicken breast or some shrimp and a nice salad and you’ve got one helluva dinner! 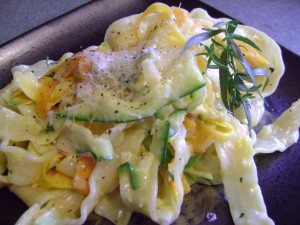 So it took over 30 minutes for the torture to stop (depending on which side of the battle you’re on – I maintained my position that if you don’t eat what I cook, you have chosen a delightful bowl of cereal in it’s place.  OK, then!) and after he cleaned up the mess he made and reassembled the couch, he enjoyed some plain pasta with veggies on the side.  OMG, the horror of mixing ingredients!

As much as I exposed him to various cuisines, you’d think he’d be a world culinary traveler.  He’s not.  In fact, he eats less variety now at 6 than he did at 3.  I don’t get it, but I know he’ll grow out of it like most people.  (Again, no offense, Mom ; D  )

He has been vegetarian all of his life, except for the last 6 months or so when I’ve gotten him to eat fish.  It’s not that I think he won’t be a healthy child without meat or fish.  Indeed, he CAN be and IS perfectly healthy and developmentally on target.  It’s just that sometimes Mommy is in the mood for a quick-cooking tilapia fillet or some shrimp and, well, this isn’t a diner. 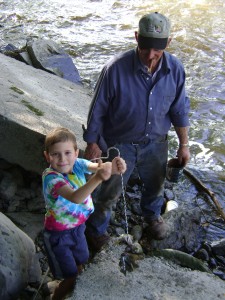 Also, Thomas goes fishing with Farmer Sonny and whatever they catch, we eat!  Talk about being involved, right?  For the longest time, I didn’t even attempt to give The Boy any fish that wasn’t caught right here with Papa.  One week, Papa had picked up some tilapia fillets and gave them to me to try.  I breaded and fried them as I always did, then nonchalantly put Thomas’ plate in front of him.

“Yeah, but is this fish that WE CAUGHT?”
“The fish on your plate is fish that Papa gave me and it is prepared in the very same way that every other piece of fish I have ever given you has been prepared.  Now, eat.” 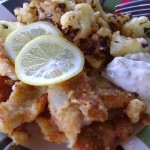 “What do you MEAN it doesn’t taste the same?”

“Fresh means that we caught it here in OUR river and Papa cleaned it and we eat it right away.”

“Very good.  That is correct – but fish can also be fresh-frozen, and sometimes Papa does THAT with the fish and sometimes we get it that way.  Now EAT!”

As a tribute to Papa, who used to sing a version of this with us as kids: 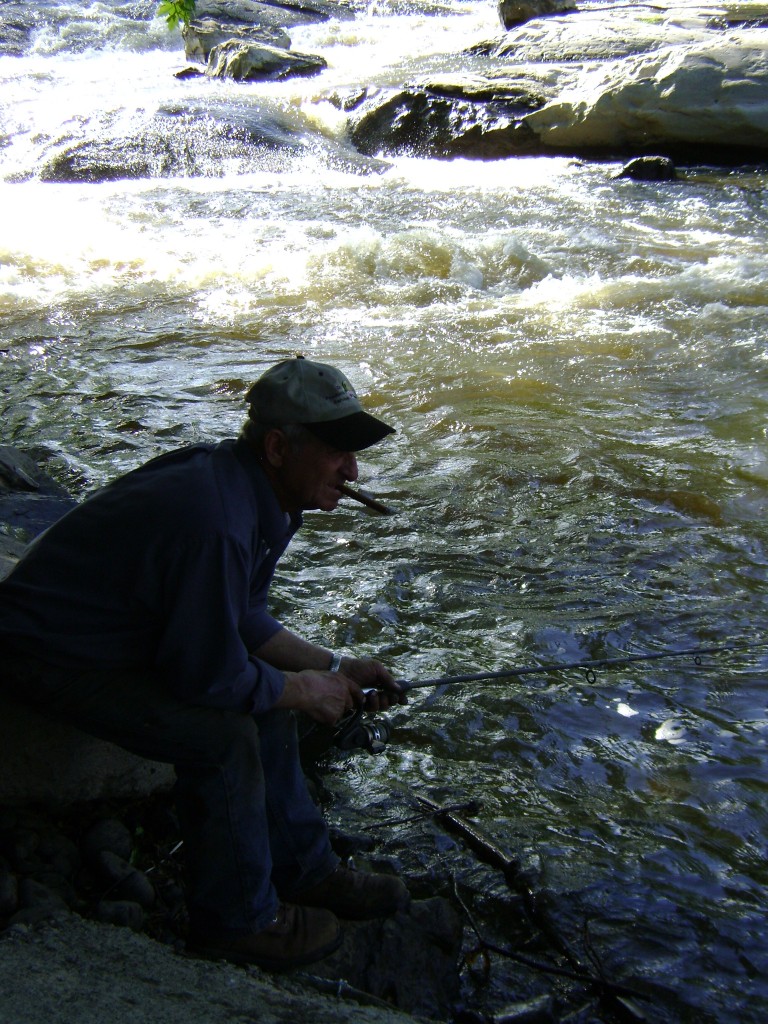 Fishy, Fishy in the brook,
Papa caught him on a  hook,
Mommy cooked him in a pan,
Tommy ate him like a man!
0
0
0
Share on Pinterest 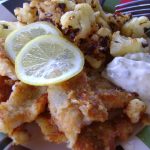 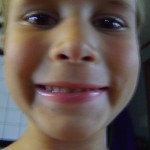 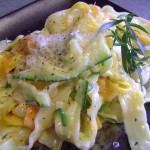 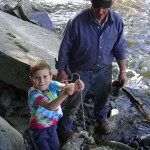 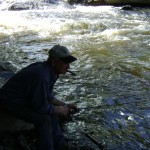 3 thoughts on “This One Will Bring Tears to Your Eyes”